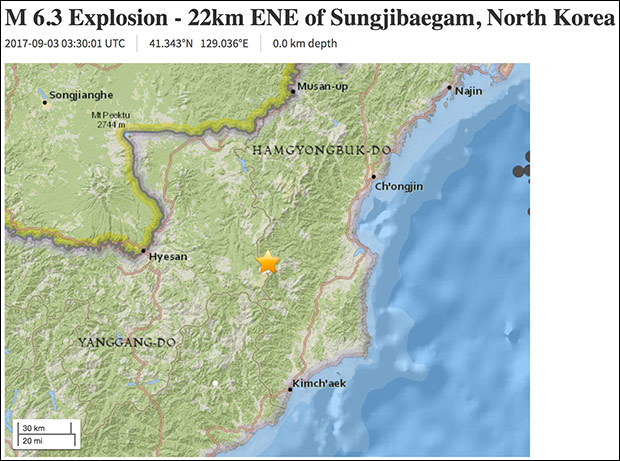 A large earthquake was detected in North Korea just hours after Pyongyang released photos of an alleged thermonuclear weapon.

The China Earthquake Administration, which also detected a 6.3 magnitude, similarly labeled the incident a “suspected explosion” at the time of publication.

North Korea experts noted that the incident occurred at 12:30 p.m. North Korea time or “at the half-hour mark,” same as the country’s fourth and fifth nuclear tests.

Japan is currently measuring the quake magnitude at 6.1 while the U.S. and China remain at 6.3. The numbers, which continue to be adjusted as more information becomes available, may change.

Experts also said that the 6.3 magnitude tremor would be consistent with a thermonuclear explosion.

China later reported a second earthquake, magnitude 4.6, due to a suspected “cave in” following the explosion.

North Korea only hours prior to the quake released photos of what it said was a hydrogen bomb.

“The institute recently succeeded in making a more developed nuke, true to the strategic intention of the WPK for bringing about a signal turn in nuclear weaponization,” North Korean state media outlet KCNA reported.