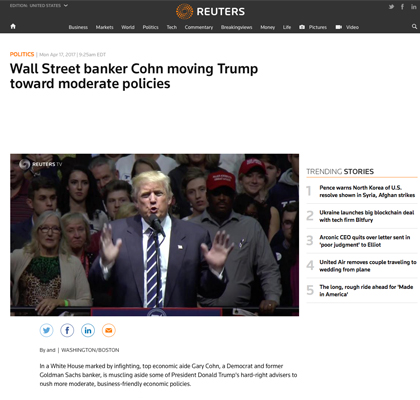 Several sources close to Wall Street and the White House have suggested Cohn is attempting to outmaneuver chief strategist Steve Bannon and push Trump to abandon many of the populist economic policies he advocated for during the presidential campaign, according to Reuters. 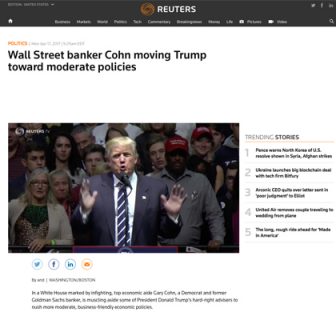 Cohn, who currently serves as director of the National Economic Council and chief economic advisor to President Trump, previously served as the president and chief operating officer of Goldman Sachs from 2006-2017.

A registered Democrat, Cohn never advised or worked for the Trump campaign, only getting to know Trump following the election in November.

Trump allegedly refers to Cohn as “one of my geniuses,” according to a source close to Cohn, who also reportedly has the backing of Jared Kushner and Ivanka Trump.

Kushner, President Trump’s son-in-law and senior advisor, became acquainted with Cohn when he was an intern for Goldman Sachs, and paved the way for Cohn to meet Trump following his election victory.

Cohn, Kushner and Dina Powell, the newly appointed Deputy National Security Advisor who previously served as an advisor to Ivanka Trump during the transition, constitute what critics have dubbed the “globalist wing” of the White House.

Sources inside the National Security Council (NSC), as well as the Defense and State Departments, have already accused Kushner of acting as “shadow secretary of state” by “assuming direct control of foreign policy” and meddling in the day-to-day operations of the NSC.

“A schism has emerged, which pits those aides who consider themselves the nationalists — including the controversial chief strategist Bannon — against a more global-minded wing, led by Trump’s son-in-law, Kushner, and his chief economic adviser Gary Cohn,” reported CNN, citing two sources familiar with the situation.

Critics have argued President Trump’s newfound openness to reappointing Janet Yellen as chair of the Federal Reserve and hesitation on naming China a currency manipulator are a result of Cohn’s influence, whom they have taken to calling “globalist Gary.”