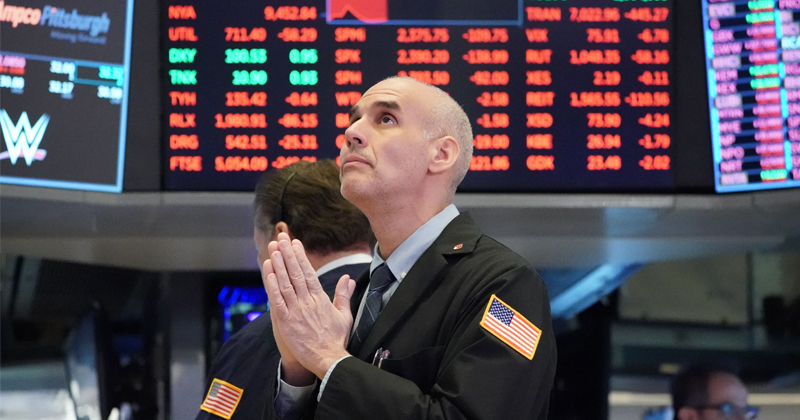 A lot of people still have faith in the dollar. Some people even believe the dollar is set to rally. Santiago Capital CEO Brent Johnson is one of those people.

Peter Schiff has been saying that the real crisis will be a dollar crisis. Even before the coronavirus pandemic, Peter was talking about the dollar’s demise. During an interview on RT last September, he warned that America’s “fiscal profligacy” was going to sink the dollar.

The unprecedented Federal Reserve money printing and the massive borrowing and spending binge by the US government in response to COVID-19 have only accelerated the process. In March, Peter said during his podcast, “I think we’re very, very close to a major collapse of the dollar, a major breakout in the price of gold, to a breakdown in the bond market.”

But not everybody is bearish on the dollar. In fact, Brent Johnson believes there will be a dollar rally.

Last year at the Vancouver Resource Investment Conference, Peter Schiff bet Johnson a gold coin that the Fed’s next move would be a rate cut. At this year’s conference, Peter collected his gold coin. Brent and Peter went on to debate the future of the US dollar. Brent says the dollar will go up this year. Peter thinks it’s going down. Peter put his money where is mouth is and went double or nothing against the dollar.

Brent bases his prediction of a rallying dollar on what he calls the milkshake theory. In simple terms, he believes that with its control of the world reserve currency, the US effectively has its straw in every other economy.

As one analyst explains it, “dollar milkshake theory views central bank liquidity as the milkshake and when Fed’s policy transitions from easing to tightening they are exchanging a metaphoric syringe for a big straw sucking liquidity from global markets.”

In a nutshell, the world depends on flows of dollars.  Loans made in USD need to be paid back with interest in USD. That means there is always a demand for dollars – especially when economies tank and you start seeing loan defaults.

But if this theory holds water, shouldn’t we have seen a major dollar rally as the coronavirus economic crisis unfolded?

Peter pointed out that the dollar did rally as the stock market imploded last March, but not significantly. The dollar index pushed to 102.9. It didn’t even get to its 2017 peak, nor could it take out its 2015 peak.

“So, you had this double-top in the dollar with the highs in 2015 and 2017, and despite all the pandemonium, all the panic, this strong dollar could not even take out that resistance. That tells you that the dollar is not nearly as strong as people think it is.”

Peter said this tells you that the milkshake theory is all wet.

Looking deeper at the theory, Peter says Brent is only focusing on the borrower. You also have to factor in the lender. Even though they might be getting paid in dollars, they don’t really want them. A lot of lenders immediately sell the dollars in exchange for their own local currencies.

Once a lender gets paid back in dollars, they may use them to buy US assets – stocks or bonds. But there is no guarantee they will. In fact, if US assets are too expensive, they’ll get out of dollars and invest in another country with better valuations.

“I think that is the key that all the dollar bulls are missing – the massive glut of dollars with no demand.”

You have to have a demand for US assets to drive the demand for the dollar. The problem is that US assets are massively overpriced.

“So, at some point, there’s this huge glut of dollars on the market and that demand that was coming from investors to get into US financial assets is not going to be there. Meanwhile, the supply of dollars is going to increase dramatically, not just from our trade deficits but from our budget deficits.”

Keep in mind that about 55 cents out of every dollar spent by the US government is being printed by the Federal Reserve. Most of the government is being financed by newly-printed money. The supply of dollars is growing dramatically. That means the price of the dollar has to come down. This is basic supply and demand.

Peter also explains why the large amounts of dollar-denominated debt don’t bode well for the dollar. It’s what will ultimately kill the dollar.

Of course, the milkshake theory ultimately depends on central bank tightening. Everybody believed that would happen after the 2008 crisis. That’s why you say that double-peak in 2015 and 2017. But as we know, the tightening process failed. The Fed went back to easing even before the pandemic. Nobody believes the Fed is going to tighten this time around. Peter said once the dollar starts falling, there is no stopping it. There is no floor. There isn’t going to be another currency war. The dollar is just going to lose. There’s not going to be a contest.