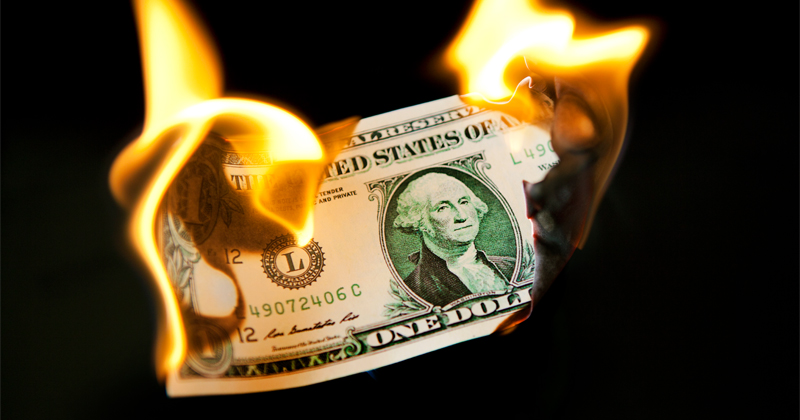 All eyes have been on the stock market in recent weeks as it has reflected the fears about the coronavirus-induced economic shutdown and the hopes of massive stimulus.

It’s been quite a rollercoaster ride. But in his podcast on March 27, Peter Schiff said there’s an even bigger problem looming on the horizon that people aren’t paying any attention to – the potential destruction of the dollar. He said Americans are in for a rude awakening.

The Dow Jones finished its best week since the Great Depression with a 915.39 point drop. But even with that big plunge, the Dow was up about 13% on the week, all on the strength of the spectacular rally on Tuesday, Wednesday and Thursday. In fact, the Dow had a bull market condensed into three days. But Peter said it was not really a bull market. He called it a “vicious correction in a horrific bear market.” And he said that bear market is “a long way from over.”

But while most eyes are on the stock market, Peter said we’re missing a more significant looming bear market — the bear market we’re going to have in the US dollar.

Peter has already explained how the actions of the Federal Reserve and the US government has set the stage to devalue the dollar, saying the dollar is cooked. He said that with the central bank and government response to the coronavirus, hyperinflation has gone from being the worst-case scenario to the most likely scenario.

A bear market in the dollar can mask some of the other problems in the economy. Consider in the 1970s, the dollar fell by nearly 70%. That means that while nominal stock market losses in the decade weren’t terrible, the real losses were significantly larger.  It was a destruction of the value of US stocks and Peter said it’s going to happen again.

A plunge in the dollar means losses on all dollar-denominated assets — stocks, bonds, real estate. It also means price inflation and rising interest rates, which pushes down the value of bonds even lower. Peter said he thinks the dollar is going to be a lot weaker in this decade than it was in the 1970s.

“I think the US is certainly starting off the decade in a much worse financial position.”

The main reason the dollar fell in the 1970s was because the US went off the gold standard. But the dollar remained the reserve currency, even though it was backed by nothing.

“It got marked down, but it didn’t get knocked out.”

During the 80s, the US enjoyed the privilege of being able to issue the world’s currency without having to back it by gold.

“That basically gave us a license to print and we’ve been abusing that ever since.”

Peter said this time he thinks the world is going to kick out the dollar as the reserve currency. If that happens, the dollar will just be another currency.

Peter said this may well crush the retirement dreams of many Americans. With the erosion of the dollar’s purchasing power, retiring simply won’t be an option for many people.

Peter also talked about the passage of the massive stimulus bill. He said it’s possible the most socialist bill ever passed. Basically, America is already a socialist nation.