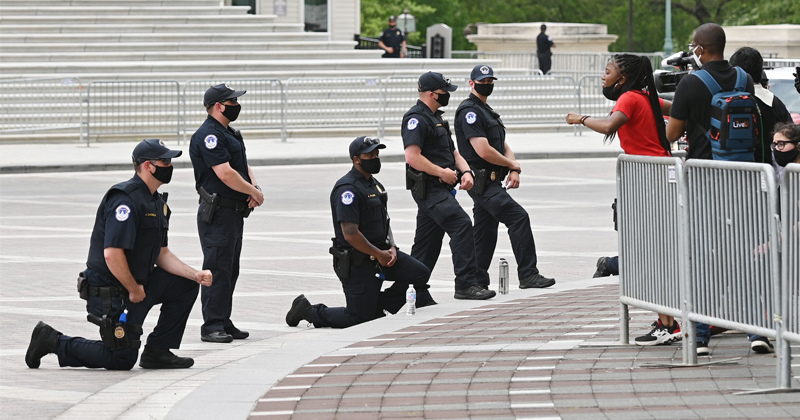 Protests have rocked the US in the wake of George Floyd’s death at the hands of a Minneapolis police officer.

In some areas, peaceful protests have crossed the line into violence and looting. But the real question is what are the long-lasting political ramifications that will come out of the unrest?

Peter Schiff talked about it during a recent podcast and worried that it could lead to bigger government and more socialism.

“The entire nation is going to end up grieving a far greater loss when it comes to individual liberty and economic freedom as a result lot of misguided, though maybe well-intentioned, legislation.”

Peter specifically singled out Alexandria Ocasio-Cortez who has tried to justify the more violent protests and the looting. The implication is that people are entitled to go out and take what’s not theirs if it’s not being given to them by the government.

“The problem is, at its core, socialism is legalized looting. That is what socialism is all about. It’s about using the power of government to plunder, to loot, what belongs to other people. So, instead of looting directly, you’re doing it indirectly by voting for somebody who’s going to loot on your behalf. But you see, once you’ve accepted that moral principle, that it’s OK to take something that doesn’t belong to you, why not cut out the middle-man? I mean, that’s what the looters are doing. They’re just being efficient.”

Peter said he thinks that the unrest will inevitably lead to more government programs and handouts, and that nobody seems at all concerned about how much it would cost or who would pay for it. And part of what’s driving this is a growing belief that nothing costs any money.

“Because we could have whatever we went. Just print the money, right? Nobody is asking what anything costs.”

Consider the push for slavery reparations. In the first place, there’s the challenge of figuring out who would be eligible for them. And then who would be responsible to pay?

“But if nobody gets stuck with the bill, because nobody actually gets one, nobody’s taxes actually go up. Hey, we just print a bunch of money, the Federal Reserve just prints the money to cut the reparations checks, it’s all for free. So, why deny somebody something that they’re going to get for free?”

Of course, nothing is actually free.

Peter also touched on income inequality. He said it’s not a failure of capitalism, but a failure to have capitalism.

“The irony of it is it’s the very government programs, it’s the regulations and the subsidies and the taxes that have been imposed over the years, over the generations – supposedly well-intentioned programs where they are designed to help the very people that are impacted the most, that are hurt the most. It’s these programs that are causing the problems. And more of these programs are just going to make the problems worse.”

The fix is to get rid of the programs that are causing the problems. Unfortunately, we’re more likely to end up with more misguided regulations and government programs that are going to take a bad situation that has already been made bad by government and make it worse.

In this podcast, Peter also talked about the impact of the violence and looting on the economy and the markets.