EcoScience: Authored in 1977 advocates for extreme totalitarian measures to control the population 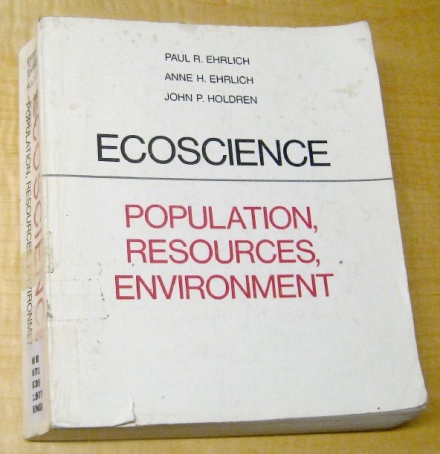 p796: One way to carry out this disapproval might be to insist that all illegitimate babies be put up for adoption—especially those born to minors, who generally are not capable of caring properly for a child alone. If a single mother really wished to keep her baby, she might be obliged to go through adoption proceedings and demonstrate her ability to support and care for it. Adoption proceedings probably should remain more difficult for single people than for married couples, in recognition of the relative difficulty of raising children alone. It would even be possible to require pregnant single women to marry or have abortions, perhaps as an alternative to placement for adoption, depending on the society.

p787-8: Adding a sterilant to drinking water or staple foods is a suggestion that seems to horrify people more than most proposals for involuntary fertility control. Indeed, this would pose some very difficult political, legal, and social questions, to say nothing of the technical problems. No such sterilant exists today, nor does one appear to be under development. To be acceptable, such a substance would have to meet some rather stiff requirements: it must be uniformly effective, despite widely varying doses received by individuals, and despite varying degrees of fertility and sensitivity among individuals; it must be free of dangerous or unpleasant side effects; and it must have no effect on members of the opposite sex, children, old people, pets, or livestock.

p838: In today’s world, however, the number of children in a family is a matter of profound public concern. The law regulates other highly personal matters. For example, no one may lawfully have more than one spouse at a time. Why should the law not be able to prevent a person from having more than two children?

P942-3 Perhaps those agencies, combined with UNEP and the United Nations population agencies, might eventually be developed into a Planetary Regime—sort of an international superagency for population, resources, and environment. Such a comprehensive Planetary Regime could control the development, administration, conservation, and distribution of all natural resources, renewable or nonrenewable, at least insofar as international implications exist. Thus the Regime could have the power to control pollution not only in the atmosphere and oceans, but also in such freshwater bodies as rivers and lakes that cross international boundaries or that discharge into the oceans. The Regime might also be a logical central agency for regulating all international trade, perhaps including assistance from DCs to LDCs, and including all food on the international market.

The Planetary Regime might be given responsibility for determining the optimum population for the world and for each region and for arbitrating various countries’ shares within their regional limits. Control of population size might remain the responsibility of each government, but the Regime would have some power to enforce the agreed limits.

More examples and specific page numbers to checkout can be found here http://zombietime.com/john_holdren/