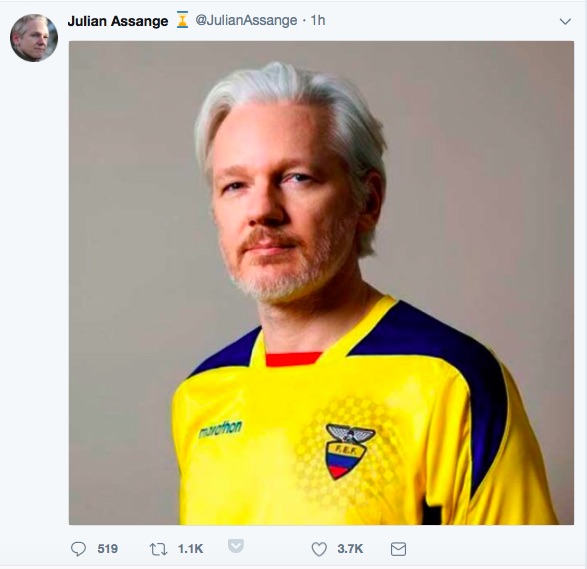 WASHINGTON, D.C. – The Ecuadorian government today issued Julian Assange an official identification number, #1729926483, in an announcement that called him a citizen of Ecuador and pledged to work with the international community to find safe passage for Assange out of the Ecuadorian Embassy in London.

In an official statement, the Ecuadorian Ministry of Foreign Affairs and Human Mobility announced that the government of Ecuador “will continue to seek solutions, in strict adherence to the norms and procedures of international law, in coordination with the United Kingdom, a country with which the best relations of friendship and cooperation are maintained.”

Today, Assange broke ten days of silence by tweeting a photograph of himself wearing a yellow jersey from the Ecuadorian Marathon FEF football team, strongly suggesting his enthusiasm that the Ecuadorian government has chosen to play a positive role in finding a way for Assange to leave his current asylum in the Ecuadorian embassy in London. 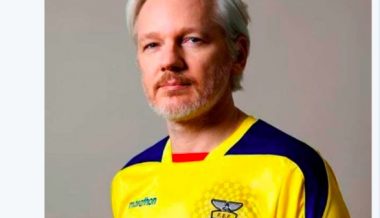 On Jan. 4, Infowars.com reported the Trump administration had cleared a path for Assange to leave London, marked by a motion filled with the U.S. District Court for the District of Columbia on Dec. 29, 2017. In the case Roy Cockrum vs. Donald J. Trump for President, Trump’s attorneys argued that Julian Assange had a right under the First Amendment to publish the DNC and John Podesta emails, even if the emails were stolen.

The case was orchestrated by Project Democracy, a group run by former attorneys from the Obama administration, arguing that then former Trump campaign adviser Roger Stone had conspired with the Russians to publish the DNC and Podesta emails.

On Jan. 2, WikiLeaks posted a tweet announcing the U.S. government had ended its eight-year-long grand jury proceedings against WikiLeaks that was expanded in 2017 to cover the WikiLeaks various “Vault” releases on CIA spy technology.

The WikiLeaks tweet referenced a State Department press conference held that day, Jan. 2, 2018, in which State Department Spokesperson Heather Nauert in a press briefing made a strong statement regarding freedom of speech that was couched in a reference to Iran.

The WikiLeaks tweet confirmed the State Department reference to freedom of speech in Iran was a coded communication intended to extend the umbrella of free speech and press rights to WikiLeaks in a clear reversal of the policy in which both CIA Director Mike Pompeo and Attorney General Sessions have argued that arresting Julian Assange is a priority. It is not clear that Assange violated national security laws, even if it can be shown he published classified U.S. national security documents.

Technically, Assange has not yet been indicted of any criminal offense in the United States, nor is it clear he has committed any crime.  Under the Supreme Court Decisions New York Times v. Sullivan, 376 U.S. 254 (1964), and in the Pentagon Papers case, New York Times v. U.S. 403 U.S. 713 (1971), a journalist is allowed to accept and publish classified documents provided by other sources.

In May 2017, the government in Sweden dropped the rape case against Assange, ending the four-year-long attempt by the Swedish government to arrest Assange via a European Arrest Warrant.

A recent decision by a United Kingdom tribunal also appears to have vitiated the arrest warrant issued by a British court in 2012, after Assange violated his bail conditions to take refuge in the Ecuadorean Embassy.

While interpreting posts intended to be cryptic is not a science, those following QAnon understand QAnon has forecast several important developments in code, in an effort to mobilize Internet-aware Trump loyalists.

– Using gematria, the numbers 10, [10-9] are translated into the letters JA, the initials of Julian Assange with “J” being the 10th letter of the alphabet and “A” being the first. The operational window for Assange’s extraction from the Ecuadorian Embassy in London is signaled to be later this week, Jan. 5-6, 2018.

– Dec. 25-26 references Emanuel Leutze’s famous painting depicting George Washington’s historic crossing of the Delaware River on Christmas night in 1776. With “painting” being posted in synch on the internet bulletin board 8chan by both QAnon and by the U.S. Department of Defense on Dec. 25, 2017.

With the possibility Assange might return to the United States, the “storm” QAnon has been predicting appears ready to begin.

QAnon’s reference to “Secured” suggests the path for Assange to return to the United States has been secured at the highest level of the U.S. government, with the knowledge and approval of President Trump.

QAnon’s reference to “Floor is yours” suggests this is Assange’s opportunity to drop key files on Hillary Clinton’s 2016 presidential campaign and the hoax of “Russia collusion” developed by CIA Director John Brennan and propagated to the mainstream media with the assistance of Google’s Eric Schmidt.

Finally, the notation “CONF_WHITE_WHITE” suggests Assange’s initial destination of Switzerland has been confirmed.  Switzerland’s national flag is a white cross (WHITE_WHITTE) against a red background. 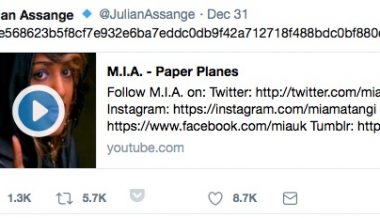 Again, in what appears to have been a synchronized post, @kill_rogue retweeted Assange’s New Year’s Day post and asked, “What words do you hear in the song?” 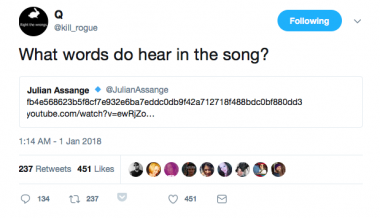