A coward dies many deaths; a brave man dies but once. 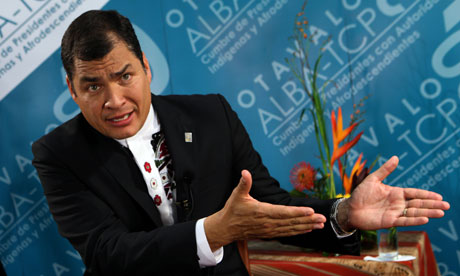 The once proud British government, now reduced to Washington’s servile whore, put on its Gestapo Jackboots and declared that if the Ecuadorean Embassy in London did not hand over WikiLeaks’ Julian Assange, British storm troopers would invade the embassy with military force and drag Assange out. Ecuador stood its ground. “We want to be very clear, we are not a British colony,” declared Ecuador’s Foreign Minister. Far from being intimidated the President of Ecuador, Rafael Correa, replied to the threat by granting Assange political asylum.http://www.nytimes.com/2012/08/17/world/americas/ecuador-to-let-assange-stay-in-its-embassy.html?pagewanted=2&_r=1&emc=na

The once law-abiding British government had no shame in announcing that it would violate the Vienna Convention and assault the Ecuadorean Embassy, just as the Islamic students in the 1979 Khomeini Revolution in Iran took over the US Embassy and held the diplomatic staff captive. Pushed by their Washington overlords, the Brits have resorted to the tactics of a pariah state. Maybe we should be worried about British nuclear weapons.

Let’s be clear, Assange is not a fugitive from justice. He has not been charged with any crime in any country. He has not raped any women. There are no indictments pending in any court, and as no charges have been brought against him, there is no validity to the Swedish extradition request. It is not normal for people to be extradited for questioning, especially when, as in Assange’s case, he expressed his complete cooperation with being questioned a second time by Swedish officials in London.

What is this all about? First, according to news reports, Assange was picked up by two celebrity-hunting Swedish women who took him home to their beds. Later for reasons unknown, one complained that he had not used a condom, and the other complained that she had offered one helping, but he had taken two. A Swedish prosecutor looked into the case, found that there was nothing to it, and dismissed the case.

Assange left for England. Then another Swedish prosecutor, a woman, claiming what authority I do not know, reopened the case and issued an extradition order for Assange. This is such an unusual procedure that it worked its way through the entire British court system to the Supreme Court and then back to the Supreme Court on appeal. In the end British “justice” did what the Washington overlord ordered and came down on the side of the strange extradition request.

Assange, realizing that the Swedish government was going to turn him over to Washington to be held in indefinite detention, tortured, and framed as a spy, sought protection from the Ecuadorean Embassy in London. As corrupt as the British are, the UK government was unwilling to release Assange directly to Washington. By turning him over to Sweden, the British could feel that their hands were clean.

Sweden, formerly an honorable country like Canada once was where American war resisters could seek asylum, has been suborned and brought under Washington’s thumb. Recently, Swedish diplomats were expelled from Belarus where they seem to have been involved in helping Washington orchestrate a “color revolution” as Washington keeps attempting to extend its bases and puppet states deeper into traditional Russia.

The entire world, including Washington’s servile puppet states, understands that once Assange is in Swedish hands, Washington will deliver an extradition order, with which Sweden, unlike the British, would comply. Regardless, Ecuador understands this. The Foreign Minister Ricardo Patino announced that Ecuador granted Assange asylum because “there are indications to presume that there could be political persecution.” In the US, Patino acknowledged, Assange would not get a fair trial and could face the death penalty in a trumped up case.

The US Puppet State of Great (sic) Britain announced that Assange would not be permitted to leave Britain. So much for the British government’s defense of law and human rights. If the British do not invade the Ecuadorean Embassy and drag Assange out dead or in chains, the British position is that Assange will live out his life inside the London Embassy of Ecuador. According to the New York Times, Assange’s asylum leaves him “with protection from arrest only on Ecuadorean territory (which includes the embassy). To leave the embassy for Ecuador, he would need cooperation that Britain has said it will not offer.” When it comes to Washington’s money or behaving honorably in accordance with international law, the British government comes down on the side of money.

The Anglo-American world, which pretends to be the moral face of humanity has now revealed for all to see that under the mask is the face of the Gestapo.