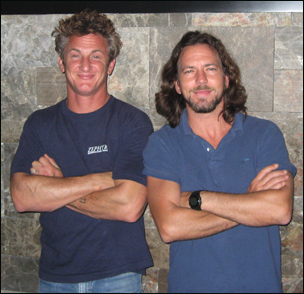 Statement from Alex Jones: At the beginning of Vedder’s dopey and stuttering diatribe, the Pearl Jam frontman says that pro-gun Americans are trying to take his First Amendment by exercising our free speech to keep him and his drooling fans from taking our right to self defense.

Vedder, you are the perfect authoritarian progressive, dumber than a box of rocks, barely able to talk and blaming those of us that disagree with your victim disarmament push as trying to take your First Amendment away. That’s what authoritarians always do, accuse those they are enslaving of being the oppressors.

You and your armed body guards need to get this straight, you are the ones trying to take people’s rights. You are a hypocrite. Stop trying to deny the common man and woman the right to self defense that you enjoy with your army of armed attendants.

Your buddy Sean Penn just came out and said Obama should sign an Executive Order to put Ted Cruz in a mental institution. That would make your idol Stalin proud.

I’ve got an idea. Why don’t you and Sean Penn take your tyranny and get the f*$# out of our country. Go to North Korea where only the state has guns, and maybe you can buy some human flesh kabobs and celebrate the all-powerful state with other dehumanized minions.

An appalled Infowars reader sent a YouTube clip of Pearl Jam frontman Eddie Vedder taking a break during a recent concert to advocate gun control, citing the tragedy at Sandy Hook as justification for wanting to further infringe on the Second Amendment.

“I had the unfortunate experience of bearing witness to Ed Vedder piss on himself intellectually, advocating taking our guns,” the reader that sent us the video stated.

Speaking in a sermonic manner over soft organ notes, the Seattle songwriter took time out of his band’s setlist last Friday to remind fans at the XL Center in Hartford, Conn., that 20 children perished with no chance of survival at Sandy Hook Elementary school last year.

“…it’s necessary that we continue a discussion to figure out how to unravel the situation where something like that can happen and make sure the odds of it happening again are very slim,” a solemn Vedder told the crowd.

Of course, the “Even Flow” composer omitted to mention that the death toll was due mostly to the fact that schools across the nation are federally designated gun-free zones, making them ideal targets for potential mass murders.

Vedder said that gun control efforts are stalled because voices on the gun rights side have been consistently louder than those of anti-gunners, but that the volume of their outcry is tempered by their actual numbers. “The amount of people – it’s just in the millions,” said Vedder dismissively.

“If we were louder, it can happen, we just have to be louder and we have to let the politicians know that they will be reelected if they do what we ask, and we are asking for them to do it now. Cause what we don’t want is for any of those children’s lives to be wasted.”

In focusing only on the indisputably tragic deaths of these few children, which he insists could have been prevented with stricter gun laws, Vedder simultaneously turned a blind eye to the deaths of innocents caused by the U.S.’s own covert drone program, started under the Bush administration, but continued and widened under Obama. The drone war has been responsible for the deaths of anywhere between 2,562 and 3,325 people in Pakistan alone, according to a report by Stanford and New York universities.

“The report said of those, up to 881 were civilians, including 176 children. Only 41 people who had died had been confirmed as ‘high-value’ terrorist targets,” Mail Online reported last October.

In an interview with surfer Mark Richards earlier this month, Vedder claimed he “almost [wished] bad things upon” gun owners, a segment of the population that Florida State University Professor of Criminology and Criminal Justice Gary Kleck, Ph.D., found use firearms to defend themselves against up to 2.5 million crimes a year.

Taking a “well if the president said it, it must be true” shortcut, Vedder also parroted Obama’s made-up figure that 90 percent of Americans supported stricter gun laws.

In the same interview, Vedder also called laws enshrined in the Bill of Rights “antiquated.”

The fact is, in Vedder’s key scenario, a fully-armed gunman entered an area where disarmed victims sat defenseless.

As INTERPOL Secretary General Ronald Noble recently stated in the wake of the Kenya shopping mall siege that left some 72 dead, one of the only ways to ensure innocent “soft targets” are kept safe in open spaces is to give them the means to defend themselves. In other words, an armed populace would be a greater deterrent to the threat of mass shootings than any new laws written – which criminals invariably disobey.

Vedder’s speech again reminds us that the establishment’s efforts to “really brainwash people into thinking about guns in a vastly different way” have been, to an extent, successful.

Whereas Vedder’s rant might have earned him the label “traitor” and gotten him tarred and feathered in the 18th and 19th centuries, today a dumbed-down public applauds a lecture given by an aging rock star on why their right to self defense needs to be further restricted.

Instead of attacking one of America’s bedrock foundations and cornerstones of liberty (it is the SECOND Amendment for a reason, after all), hopefully sometime in the near future Mr. Vedder can experience an introspective moment in which he realizes guns are not only used by criminals, but many times by innocent people in self defense, after which his attention can be turned to the myriad of pressing issues seriously threatening our liberties – the multitude of threats to privacy, the freedom to assemble, the freedom of the press, the freedom to speak out against corrupt government systems without threat of arrest, the threats to economic and financial viability, and the very real threat that drone strikes pose to citizens abroad.

Tonight I got to meet three great men, incredible fathers of children who were lost, and it was such a powerful.. a very powerful moment to have this chance to communicate to somebody that we had been thinking about so deeply.

And to know that it’s okay, in fact, not just okay, but it’s necessary that we continue a discussion to figure out how to unravel the situation where something like that can happen and make sure the odds of it happening again are very slim.

[“Eddie for president,” one fan is heard saying.]

And you know, as well as I, you have to be very careful when talking about something like this. They want to defame your character or take away your right to speak, I mean while they’re protecting the second amendment they don’t think you have the right to speak as an American as a taxpayer as a father, as a parent.

We’ve got a right to speak on this issue when the safety of our children is directly affected. And you will take some hits if you put it out there, but that’s the thing. I just want to clarify and we’ve done some research and I’ve talked to some very, much smarter people than myself – there’s a lot of them – that the myth that the gun lobby is the most powerful lobby in our country is a myth.

That’s a myth. The money is not the most money. The amount of people – it’s just in the millions. It’s a myth, but it’s just because they’re louder. They’re louder and they’re very tenacious and if you speak up against them they will jump on you, they will tear you apart, and make it so that nobody else wants to say anything, or they want them to be fearful that…I mean we’re talking about, I’m gonna stop. You know what they’re talking about.

So, if all the research is saying, and all the polls conducted, you know, and not just people reacting to what happened, but you have to not just react you have to prefect. You have to go into prevention mode. So what we have to do, if the majority of people agree that there should be more legislation just to make it a little harder. We’re not taking away the right, just a safety issue – a safety precautionary, the same things you have to do to get a driver’s license or a car.

[Cue thunderous applause for the death of liberty.]

It can’t be as easy as buying a pair of shoes. [inaudible] All I implore you, and I don’t mean to be preaching to the converted, but sometimes the choir has to sing louder, and that’s one of these issues.

If we were louder, it can happen, we just have to be louder and we have to let the politicians know that they will be reelected if they do what we ask, and we are asking for them to do it now. Cause what we don’t want is for any of those children’s lives to be wasted.