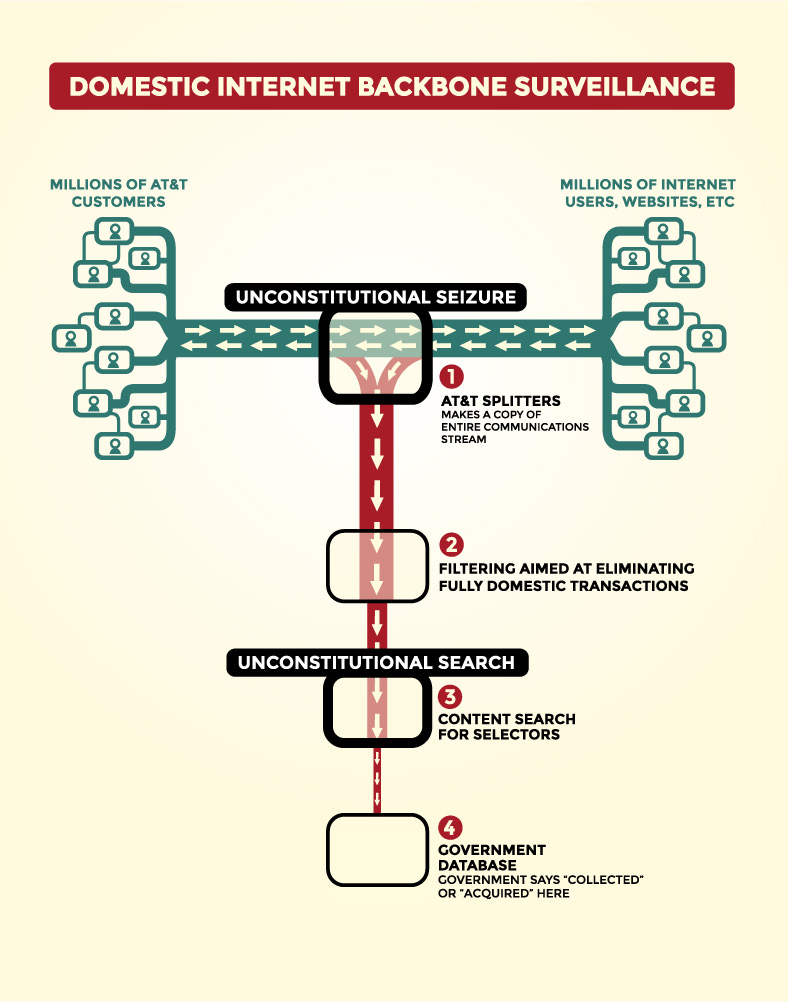 Snowden’s leaks continue to help build the EFF’s case against the NSA. Its lawsuit against the intelligence agency (filed on behalf of several plaintiffs, Carolyn Jewel being named first) was filed in 2008, but has gained significant traction over the past twelve months.

This case is also at the center of the DOJ’s on-again, off-again metadata destruction plans, which ultimately resulted in the FISA court backing up the district court’s preservation order preventing the destruction of relevant aged-off Section 702 data. The DOJ said one thing and did another, in the end destroying evidence and claiming the NSA’s was “too complex” to separate relevant data from the rest of the collection.

The recent leaks provided more evidence that the NSA routinely collected not only metadata but communications of American citizens, and has lead the EFF to file a motion for summary judgement declaring that the NSA’s “internet backbone” surveillance programs are unconstitutional.

This motion is based almost entirely on the government’s formal, acknowledged admissions. This is because a Motion for Partial “Summary Judgment,” such as this one, cannot be decided if the parties disagree about material facts. It is a common litigation strategy to make a motion based upon the undisputed facts so that the court can rule on an important legal issue, even if there are other facts that are not yet agreed upon.

In essence, we are saying that even if you accept the government’s own descriptions of its internet backbone spying, the spying is still unconstitutional.

In the motion, the EFF details how the NSA’s untargeted collections violate the Fourth Amendment and could not possibly be covered by any issued warrant.

Seizing the communications of American citizens can only be done with a warrant — one that specifies the target, time period and other limitations. This is how government agencies stay compliant with the Fourth Amendment. In the NSA’s case, all of that is thrown out. There is no targeting to speak of. Everything is collected and sorted through for relevant information after the fact. Because no warrant would reasonably cover the massive amount of data and communications collected, the NSA operates without one. As the EFF points out, FISA court orders are not warrants and the collection of metadata authorized by these are governed by a generous reading of the Third Party Doctrine. What the NSA pulls off the internet backbone are actual communications — all without a warrant or any associated restrictions other than some belatedly (and arbitrarily) applied minimization procedures.

All of this adds up to a very clear violation of the Fourth Amendment.

In truth, no valid warrant could authorize the government’s admitted practices here. The government’s targeting and minimization procedures are no substitute for the fundamental protections that the Constitution guarantees to all Americans. The ongoing dragnet seizure and search of innocent Americans’ Internet activities violates the Fourth Amendment.

The EFF’s filing also includes the following infographic (created by Hugh D’Andrade) that shows how the NSA’s backbone collection works.

A crucial part of the Fourth Amendment that often gets overlooked is the protection against unconstitutional seizures. As the EFF points out, when the NSA grabs everything from AT&T’s backbone, this constitutes a seizure. The NSA may not consider it to be a “collection” (or run searches) until three steps later, but it grabs communications in bulk before applying any minimization or targeting.

The utilization of a warrant (also a key factor to constitutionality) would require the NSA to determine what it was searching for well before it could move ahead with the seizure. It would also require the agency to specify what it’s seizing. Other agencies have asked for bulk, non-specific seizures of electronic data/communications (and permission is sometimes granted), but this process at least allows another party to act as a check against overreach. The NSA operates without warrants, bypassing any external checks against abuse, and simply clones communications traveling these internet backbones.

As is noted several times (and with several citations), these claims are established facts, most of which the government itself has confirmed via statements issued in response to leaks as well as in the many hearings held in the wake of the Snowden leaks. There’s really no room for argument, although it’s virtually assured the government will find something to justify its bypassing of the Fourth Amendment. The EFF speculates that this argument will revolve around the NSA’s very slippery and self-serving definition of “collection.”

As we try to make clear in the motion, especially at footnote 13, the government uses a very different definition of “collect” or “acquire” than most people do, limiting “collection” or “acquisition” to stage 4, when the communications are actually stored in the government’s database. An easy place to see this is in DNI Clapper’s explanation for denying to Senator Wyden that the U.S. government is “collecting” data on millions or hundreds of millions of Americans.

It’s up to the court to decide whether or not the NSA’s collection is a collection when the NSA says it is — or when it’s actually collected.

The government can also be expected to re-deploy its “special needs” argument, which posits that the good of the few (the NSA) outweighs the good of the many (the American public). The hunt for terrorists should outweigh the public’s expectation of privacy, whatever minimal amount is left after the government’s exploitation of the Third Party Doctrine. The EFF warns the court about this expected argument, noting that the government’s “needs” don’t outweigh its obligation to honor its citizens’ civil liberties.

Although “the government’s interest in preventing terrorism . . . is extremely high,” the importance of that interest “is no excuse for the dispensing altogether with domestic persons’ constitutional rights.” Al Haramain Islamic Foundation, 686 F.3d at 993; see also Keith, 407 U.S. at 316-21 (rejecting government’s argument that national security required dispensing with the warrant requirement in domestic security surveillance cases). “Emergency does not create power. Emergency does not increase granted power or remove or diminish the restrictions imposed upon power granted or reserved. . . . [¶] . . . [E]ven the war power does not remove constitutional limitations safeguarding essential liberties.” Home Building & Loan Ass’n v. Blaisdell, 290 U.S. 398, 425-26 (1934). Allowing even legitimate national security concerns to override the most fundamental of Fourth Amendment protections—the prohibition on the modern-day equivalent of the despised “general warrant”—would turn the Constitution on its head and destroy the basic civil liberties that the Founders fought to protect.

The bulk metadata collection (Section 215/501) has already had its Constitutionality challengedby one judge. The EFF is seeking a similar decision on the NSA’s Section 702 program with this filing. The extra attention of the Snowden-imposed daylight has led to concessions on Section 215 by the NSA. With any luck, Section 702 is in line for similar discussion and modification.