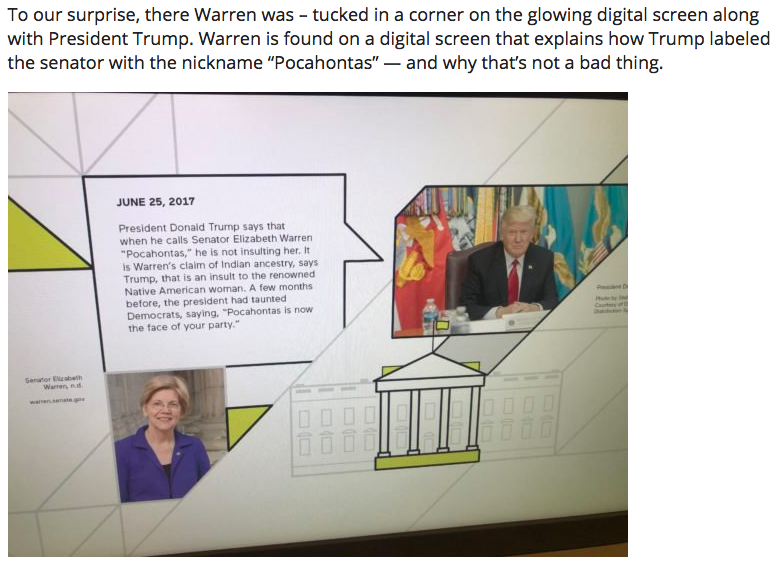 There’s a tidbit about Warren, who’s controversial DNA results failed to prove her declared Cherokee descendancy, at the Pocahontas exhibit, according to the Daily Caller.

At the exhibit, Warren is featured on a digital screen with the following text:

President Donald Trump says that when he calls Senator Elizabeth Warren “Pocahontas,” he is not insulting her. It is Warren’s claim of Indian ancestry, says Trump, that is an insult to the renowned Native American woman.  A few months before, the president had taunted Democrats, saying, “Pocahontas is now the fact of your party.”

Warren’s claim of Cherokee ancestry has been a controversial subject nationally, and on Monday she released her DNA results that suggested she was between “1/64th and 1/1024th Native American.”

“A DNA test is useless to determine tribal citizenship,” he said in a statement. “Current DNA tests do not even distinguish whether a person’s ancestors were indigenous to North or South America.”

The researcher who examined Warren’s DNA used DNA samples from “Mexico, Peru and Colombia” to “stand in” for Native American DNA in North America, according to the Boston Globe.

To join the Cherokee Nation, Warren would need to provide documentation of her direct ancestor listed on the Dawes Rolls of the tribe.