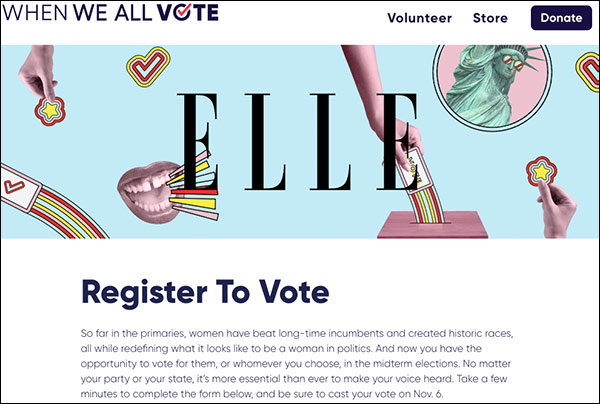 The tweet claimed famous celebrity power couple Kanye West and Kim Kardashian were splitting up, and featured a picture of the two, complete with gasp and broken heart emojis.

Kim Kardashian and Kanye West are splitting up 😱💔 https://t.co/epwKG7aSBg pic.twitter.com/u7qqojWVlR

A link in the tweet redirects to WhenWeAllVote.com, a non-profit voter registration site co-chaired by former First Lady Michelle Obama, Hamilton actor and author Lin-Manuel Miranda, and a slew of other liberal entertainers.

The landing page is catered to Elle’s mainly female readership and encourages women to head to the polls for the midterms on Nov. 6.

“So far in the primaries, women have beat long-time incumbents and created historic races, all while redefining what it looks like to be a woman in politics. And now you have the opportunity to vote for them, or whomever you choose, in the midterm elections. No matter your party or your state, it’s more essential than ever to make your voice heard,” the page reads.

This is trash nonsense. Who do you think you are reaching with this? Guess what? One can be civic minded and interested in celebrity gossip. Do better.

How toxic and Satanic. This is election meddling and Fake News! Link doesn’t go to story. Wow—new left-wing low.

It’s not clever – its taking advantage of the situation. There are smarter ways to do it without lying in a climate where trust in media is crazy low

No, it’s aimed at all women, and insinuates that women who are interested in pop culture cannot also possibly be politically informed on their own.

it's not satire. it's just actual fake news to clickbait people. even if the end is a good thing (registering to vote), the means is despicable.

Many credited anti-Trump author Ashlee Marie Preston for devising the trick after she made a tweet last week lamenting Kanye and Kim’s imaginary break-up, with a link re-directing to vote.gov.

Wow I can’t believe this is why Ariana Grande and Pete Davidson split up https://t.co/WQrbEBV6uD pic.twitter.com/Dc8b9azhua

Elle’s intentionally misleading tweet comes on the heels of West’s visit to the White House last week, where he discussed prison reform, his vision for the black community and his admiration of Trump himself. 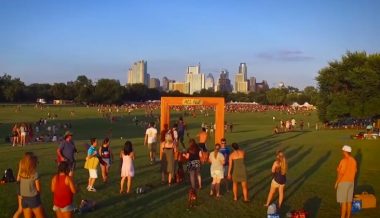