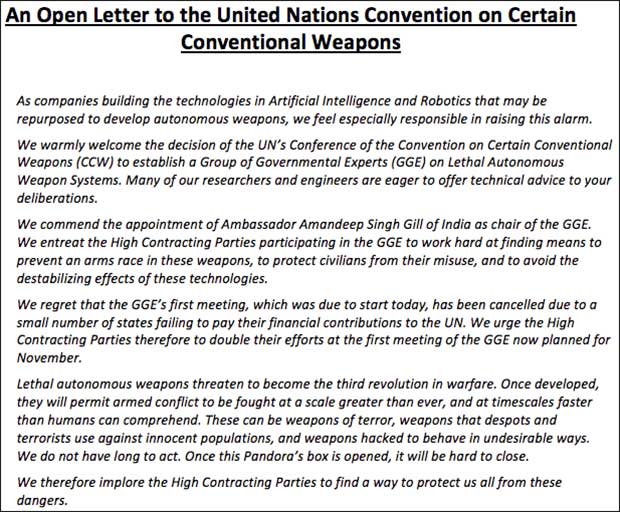 In a letter released by Australia’s University of New South Wales Monday, Musk and 115 other robotics and AI specialists called on the United Nations (UN) to take action against the weaponization of AI.

“Lethal autonomous weapons threaten to become the third revolution in warfare,” the letter states. “Once developed, they will permit armed conflict to be fought at a scale greater than ever, and at timescales faster than humans can comprehend.”

The group, comprised of experts from 26 countries, also argued that time was running out to contain the advancement of “weapons of terror.”

“These can be weapons of terror, weapons that despots and terrorists use against innocent populations, and weapons hacked to behave in undesirable ways,” the letter continued. “We do not have long to act. Once this Pandora’s box is opened, it will be hard to close.”

If you’re not concerned about AI safety, you should be. Vastly more risk than North Korea. pic.twitter.com/2z0tiid0lc

Musk also stressed the need for preemptive regulation on AI last month while speaking in Providence, Rhode Island, at the US National Governors Association summer meeting.

“Normally the way regulations are set up is when a bunch of bad things happen, there’s a public outcry, and after many years a regulatory agency is set up to regulate that industry,” Musk said. “It takes forever. That, in the past, has been bad but not something which represented a fundamental risk to the existence of civilization.”

The comments spurred Facebook CEO Mark Zuckerberg, who did not sign the Monday letter to the UN, to accuse Musk of drumming up “doomsday scenarios.”

“I think people who are naysayers and try to drum up these doomsday scenarios — I just, I don’t understand it,” Zuckerberg said. “It’s really negative and in some ways I actually think it is pretty irresponsible.”

“In the next five to 10 years, AI is going to deliver so many improvements in the quality of our lives.”

Musk responded by calling the Facebook co-founder’s understanding of the subject “limited.”

I’ve talked to Mark about this. His understanding of the subject is limited.