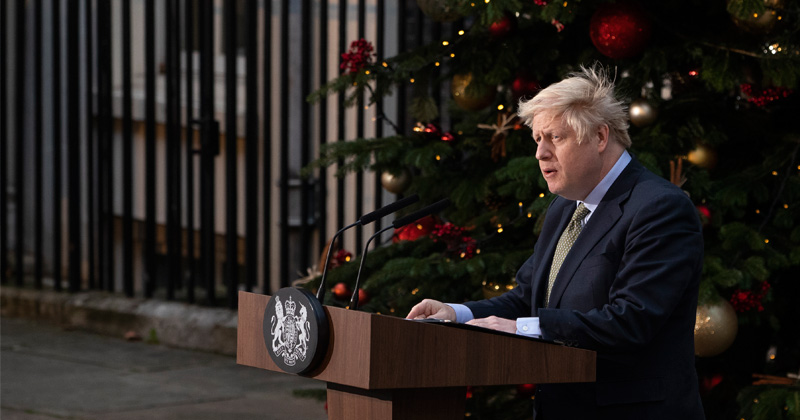 Boris Johnson’s Conservatives won an outright majority in yesterday’s general election, pushing the Tories to an 80-strong Commons majority in what the Daily Mail called a “staggering election landslide.”

Given that the Conservatives employed an election slogan of “Get Brexit Done,” it appears the election was largely a referendum on Brexit. The Conservative victory suggests Johnson will now move forward much more quickly on putting a UK-EU agreement in place for UK withdrawal.

With the issue of UK independence from the EU, the issue of trade between the UK and the outside world beyond Europe now appears to be much more of an urgent reality.

Trade with the EU has long been a hobby horse of the Remainers, who claim that the UK must remain inside the EU or the UK’s exporters will be cut off from outside markets.

This has never been a very plausible argument because if the EU were to simply cut the UK out of European trade, the cost of living for people in EU member states would go up considerably. It can’t be assumed the UK would have no leverage in such a case. Moreover, as Peter Lilley, former Secreatry of State for Trade and Industry pointed out, it is likely that paying an EU tariff would be less costly to the UK that continuing the pay the enormous sums required of British taxpayers to remain EU members.

Moreover, because membership in the EU requires members states adhere to the EU’s trade restrictions on non-EU states, this means the UK is restricted in its own trade with outsiders, such as the US, China, and the rest of the world. That is, EU membership means Parliament is not free to unilaterally lower trade barriers with the US, Canada, or South American states (for example).

This, of course, raises the cost of EU membership very high indeed.

With the 2019 election out of the way, and with the UK heading toward Brexit, now is the time to lower all trade barriers between the UK and the US.

The US should lead by example and implement unilateral free trade immediately.

Yesterday, as it became clear the Conservatives would sail to victory, Donald Trump hinted he’d pursue a new “trade deal” with the UK:

Congratulations to Boris Johnson on his great WIN! Britain and the United States will now be free to strike a massive new Trade Deal after BREXIT. This deal has the potential to be far bigger and more lucrative than any deal that could be made with the E.U. Celebrate Boris!

Trump announced: “Britain and the United States will now be free to strike a massive new Trade Deal after BREXIT. This deal has the potential to be far bigger and more lucrative than any deal that could be made with the E.U.”

Trump’s tweets are often little more than gaslighting and posturing, so it one can’t say what the actual significance of this announcement is.

But the fact is the United States government doesn’t need a trade “deal” with the United Kingdom. Nor does it need the president to negotiate with UK government or issue any executive orders. All that needs to happen is the Congress to pass legislation stating there will be no tariffs, quotas, or other restrictions imposed on imports from the UK. The end.

After all, what is the argument against this?

We can consider all the usual “arguments” against free trade in this case:

One: The “giant sucking sound.” This is phrase once used by presidential candidate Ross Perot in his claim that a trade deal with Mexico — not at all a “free trade” deal, by the way — would result in US jobs being sucked into Mexico.

Even if this claim were true — it’s not — it is premised on the fact wages are much lower in Mexico than in the United States. This claim, however, doesn’t apply at all to the UK. UK wages are “rich country wages.” The idea that a Georgia manufacturer would move a factory to the UK — where government taxes and regulations are in many cases higher than in the US — has little basis in reality.

Two: The British will “exploit Americans!” The idea here is that if the US were to enact unilateral trade, the British would slap big tariffs on US imports while freely British goods to the US. The answer to this is “so what?”

By giving Americans free access to all exported British goods and services, this only helps American businesses and consumers better manage their own budgets and needs.

The UK, for instance is a large exporter of pharmaceuticals. It’s hard to imagine how giving Americans more access to medication “exploits” Americans. The British also export large amounts of automobiles, aircraft parts, auto parts, and hard liquor. All of these items would help improve the bottom lines for American business owners, leading to more employment and more production in the United States.

Some protectionists may complain: “but importing car parts” — for example — “will put American auto-part makers out of business!” It’s unclear how this would occur.  It is not the case that the British can manufacture all types of car parts more economically than American manufacturers. They surely can in some areas and not in others. Moreover,  inexpensive auto parts mean a better situation for auto repair shops, auto-parts retailers, and American auto manufacturers who rely on those parts.

More inexpensive parts are good for a wide variety of industries. But what protectionists are claiming in this case is that taxes on Americans ought to be raised to protect a single industry — the auto parts industry.

The geopolitical benefits of such an arrangement are important as well. Were the UK to be tied into such a valuable trade relationship with the US, this would improve US-UK relations all the more.1

Three: The British will put “strategic industries” out of business!

This is the national-defense argument. The claim is that if free trade is allowed, the Chinese (for example) will export so much steel, they’ll put all American steel producers out of the business. And then the US can be cut off from steel and rendered impotent militarily.

Robert Murphy has explained how this claim doesn’t even work on a theoretical level:

This argument fails to appreciate that the free market is entirely capable of handling disruptions in supply. If the protectionist citizen who writes Letters to the Editor is capable of foreseeing an interruption in steel imports during a major war, so too can the tycoons and speculators in the steel industry itself. After all, they stand to make or lose billions of dollars depending on the accuracy of their forecasts.

Consider the worst-case scenario where the U.S. imports all of its steel from foreign countries, and there is a large probability that there will be a major war in one year, and that if this happens every single one of our suppliers will cut off shipment of steel. What will be the market’s response? Will steel continue to sell at its usual price, and will people in the steel industry focus merely on tomorrow’s stock prices?

Of course not. If the supply of steel should be completely cut off, the market price of steel would skyrocket (assuming the government does not take steps to prevent “gouging” and “profiteering”). Because of this possibility, speculators today will buy and stockpile huge quantities of steel at the current low prices. (After all, even if the war never comes, they can simply resell the steel at its original price, losing only the costs of storage. Steel is not perishable like milk or tomatoes.)

But even if the claim held some water in theory, it still wouldn’t apply to a free-trade situation between the UK and the US.

First of all, it’s exceedingly unlikely that the UK could somehow overwhelm the US with cheap steel. Steel isn’t a major export item for the UK. But even if the US could become reliant on UK steel somehow, once the US is the UK’s biggest export market, what motivation would the UK have to start a war with the US? Would the UK then send its relatively tiny Navy over the Atlantic to shell New York?

Protectionists like to accuse free traders of being “naïve” but the idea that the UK would use free trade with the US to make the US London’s geopolitical stooge should strike one as paranoia on a grand scale.

We’ve already shown the usual claims made by protectionists don’t apply. The UK won’t suck jobs out of the US, and UK goods won’t bring a wave of failed American businesses.

Similar to Trade Between US States

After all, it’s a safe bet than California exports far more goods and services to Idaho — especially when measured in dollar amounts — than the other way around. Yet no one claims free trade with California “exploits Idahoans.” It would, of course, not improve the Idaho economy were Idaho to begin charging its citizens a ten-percent tariff on items imported from California.

The fact there is a lopsided relationship here — more exports flowing one way than the other — is not a reason to end free trade.

We ought to think of trade between US states and the UK in the same way.

Yes, it may take some time for the Brits to figure out that unilateral free trade with the US from their end would be to their advantage. But that’s of little concern since Americans would certainly benefit in the mean time.