Three US warships to encircle Iran within days

The announcement that emergency oil stocks will be released by the United States and the UK, a move that will temporarily drive down prices, could be the precursor to an attack on Iran that will send crude prices soaring again. 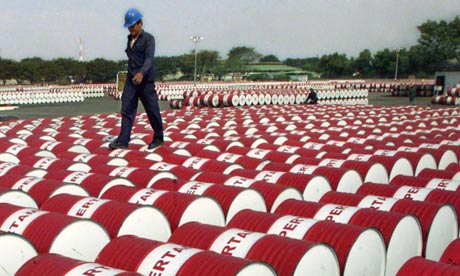 “Britain has decided to cooperate with the United States in a bilateral agreement to release strategic oil stocks, two British sources said, in an effort to prevent high fuel prices derailing economic growth in a U.S. election year,” reports Reuters.

Details of the agreement will be released later today and the process is expected to be implemented by the summer, which is the deadline numerous observers have put on any potential military strike on Iran.

The move is ostensibly aimed at driving down oil prices, which have reached up to $125 a barrel for brent crude, but it could also be a maneuver to offset the inevitable spike in oil prices should Iran retaliate against the U.S. and Israel by closing the Strait of Hormuz.

“Crude down big on the news, which is merely an advance move ahead of almost inevitable war with Iran, simply to make the spike more palatable,” reports Zero Hedge.

Iran was today eliminated from the SWIFT global financial transaction service, a move that makes it impossible for Tehran to conduct international trade via conventional methods. Iran’s economy has been under sustained attack for months, with western sanctions largely responsible for a 10-year low in oil production.

According to reports out of Israel, Prime Minister Benjamin Netanyahu now has now for the first time secured a majority of votes in the cabinet to go to war with Iran.

“This means that theoretically Bibi can begin an attack at any time. Of course, it could mean something different: it could mean the cabinet has approved a strike at any point in future with Bibi determining the timing. So it doesn’t necessarily mean the F-16s will fly tonight or tomorrow. But it could,” writes Richard Silverstein.

Last month the Washington Post reported that US Secretary of Defense Leon Panetta expected Israel to hit Iran in April, May or June.

There are already two carrier battle groups located in the waters just outside Iran, with the USS Carl Vinson and the USS Abraham Lincoln already stationed in the region, along with the USS Makin Island (LHD-8), a Wasp-class amphibious assault ship.

A third US battleship, the USS Enterprise, is also on its way to the region, meaning that almost the entirety of the United States’ active naval fleet of warships will be stationed just outside Iran within the next 4-6 days.

The US has made it clear that should Iran try to block the Strait of Hormuz, the region’s key oil choke point, a “red line” will have been crossed.

The Stratfor naval update map below illustrates how Iran is being surrounded by military muscle (click for enlargement).