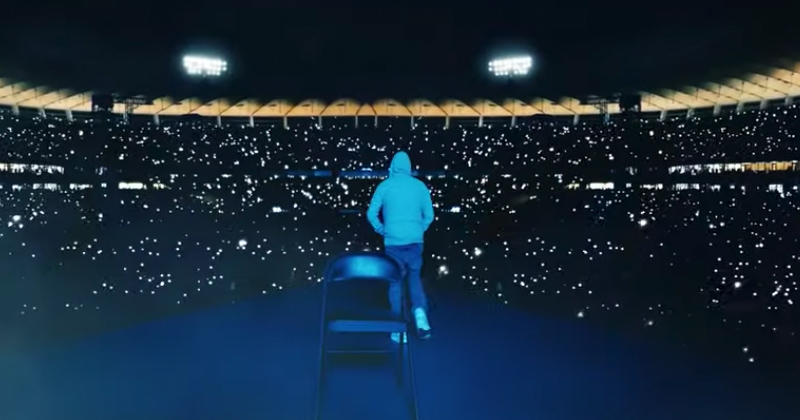 Aging rapper Eminem invokes the Las Vegas massacre in a track off his new album aimed at dissing the Second Amendment.

In the song, “Darkness,” which is accompanied by a graphic music video, Eminem walks through the Vegas shooter’s thoughts as he prepares to unload a barrage of gunfire on a crowd of concert-goers, similar to the gruesome scene that unfolded on October 1, 2017, during the Route 91 Harvest country music festival.

Rapping lyrics like, “Fuck the Colt 45, I’ma need somethin’ stronger,” and “Commando with extra clips, I got ammo for all the hecklers,” Eminem describes how an armed psycho hopped up on prescription medication loses grip on reality and snaps, with “rapid fire spittin’ for all the concert-goers.”

“Finger on the trigger, but I’m a licensed owner / With no prior convictions, so loss, the sky’s the limit,” raps the lyricist, in a not-so-subtle dig at law-abiding gun owners.

“Strapped like I’m a soldier,” Eminem says in another line, echoing liberal terminology which redefines semi-automatic rifles as weapons of war.

Despite singing earlier in the song about being “schizo” and on “booze,” “valium,” “meds,” and “benzodiazepine,” Eminem ends his anti-gun rant claiming, “But if you’d like to know the reason why I did this / You’ll never find a motive, truth is I have no idea / I am just as stumped, no signs of mental illness.” 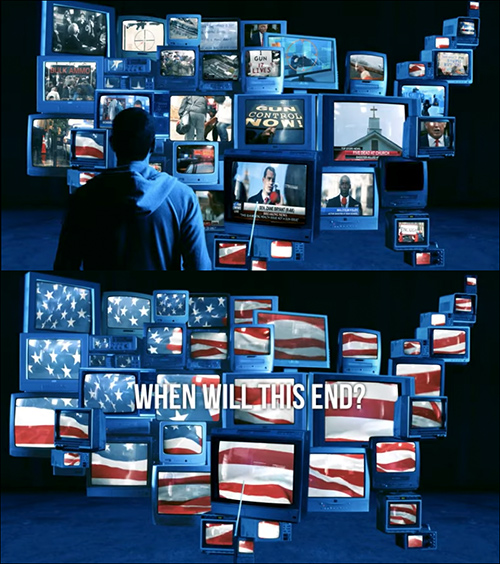 The video ends with a slow zoom out on a smattering of TVs in the shape of the United States, all playing news reports of shootings from across the country.

“When will this end?” text on the video asks. “When enough people care.”

“Register to vote at vote.gov. Make your voice heard and help change gun laws in America,” the video concludes, exposing its true purpose.

Further evidence of the song’s intent to undermine gun rights can be found at Eminem’s very own website, where he credits various Democrat-run gun control groups – including the Giffords Law Center, Michael Bloomberg’s Everytown for Gun Safety, Sandy Hook Promise and March for Our Lives – with helping “put an end to senseless gun violence.”

In other news related to Eminem’s surprise new album, “Music to Murder By,” the rapper was criticized this week for including a lyric on the song, “Unaccommodating,” alluding to the 2017 bombing at an Ariana Grande concert in Manchester, England, a jihadist attack which left 23 people dead.

Read the lyrics for “Darkness” below, via genius.com:

[Verse 2]
Now I’m starin’ at the room service menu off a Benzo
I can hear the music continue to crescendo
I can see the whole fuckin’ venue from my window
That’s when you know you’re schizo
(Hello darkness, my old friend)
‘Cause I keep peekin’ out the curtain from the hotel
The music is so loud
But it’s almost as though I don’t hear no sound
I should get ready for the show now
Wait is this the whole crowd? I thought this shit was sold out
(Hello darkness, my old friend)
But it’s only the opening act, it’s early, don’t overreact
Then something told me relax
And just hope for the show to be packed
Don’t wanna hit the stage before they fill each row to the max
‘Cause that’d be totally wack
You can’t murder a show nobody’s at
(Hello darkness, my old friend)
But what if nobody shows? Panic mode
‘Bout to snap and go motherfuckin’ wacko at any second
‘Bout to cancel the show just as fans below rush the entrance
Plan is a go to wreck shit, cameras in all directions
(Hello darkness, my old friend)
The press is about to go ape shit bananas on all the networks
Commando with extra clips, I got ammo for all the hecklers
I’m armed to the teeth, another Valium, fall off the bed
Hit the ground and crawl to the dresser
Alcohol on my breath as I reach for the Scope
I’m blackin’ out, I’m all out of meds
With them benzodiazepines gone
Now it’s just magazines sprawled out on the floor
Fuck the media, I’m goin’ all out, this is war
(Hello darkness, my old friend)

[Verse 3]
People start to show up, time to start the show up
(Hello darkness, my old friend)
It’s 10:05 PM and the curtain starts to go up
And I’m already sweatin’ but I’m locked and loaded
For rapid fire spittin’ for all the concert-goers
Scopes for sniper vision, surprise from out of nowhere
As I slide the clip in from inside the hotel
Leanin’ out the window, going Keyser Söze
Finger on the trigger, but I’m a licensed owner
With no prior convictions, so loss, the sky’s the limit
So my supplies infinite, strapped like I’m a soldier
Got ’em hopping over walls and climbing fences
Some of them John Travolta, staying alive by inches
(Hello darkness, my old friend)
Cops are knockin’, oh fuck, thought I blocked the entrance
Guess show time is over
No suicide note, just a note for target distance
But if you’d like to know the reason why I did this
You’ll never find a motive, truth is I have no idea
I am just as stumped, no signs of mental illness
Just tryin’ to show ya the reason why we’re so fucked
‘Cause by the time it’s over, won’t make the slightest difference
(Hello darkness, my old friend)