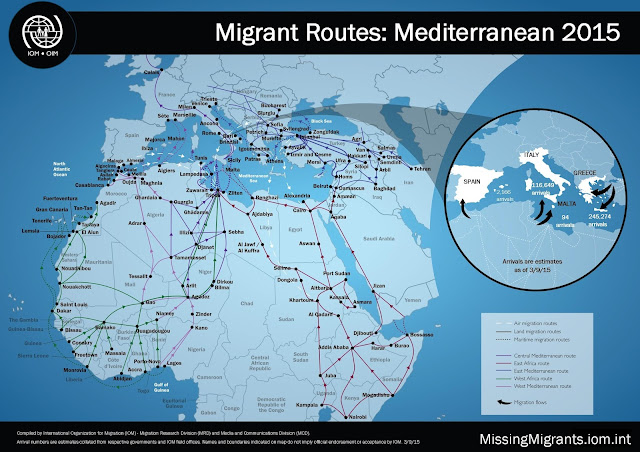 While the Western media attempts to portray the sudden influx of refugees suddenly appearing out of no where at Europe’s gates, the reality is that for years they have been gathering in expansive, well-funded refugee camps in Turkey.

In fact, Turkey has brought in over 2 million refugees with a suspiciously eager “open door” policy and has spent upward to 6 billion USD on building and maintaining these immense camps. They have done so as part of a long-standing strategy to justify creating “safe havens” in northern Syria – essentially NATO invading and occupying Syrian territory, protecting their terrorist proxies within Syria’s borders so that they can strike deeper toward Damascus and finally topple the government of President Bashar Al Assad.

US plans to carve out a “safe haven” or “buffer zone” in northern Syria stretch back as far as 2012 – before a real crisis even existed. In their “Middle East Memo #21,” “Assessing Options for Regime Change,” it was stated specifically (emphasis added):

An alternative is for diplomatic efforts to focus first on how to end the violence and how to gain humanitarian access, as is being done under Annan’s leadership. This may lead to the creation of safe-havens and humanitarian corridors, which would have to be backed by limited military power. This would, of course, fall short of U.S. goals for Syria and could preserve Asad in power. From that starting point, however, it is possible that a broad coalition with the appropriate international mandate could add further coercive action to its efforts.

Brookings would elaborate upon this criminal conspiracy in their more recent report titled, “Deconstructing Syria: Towards a regionalized strategy for a confederal country.” It states (emphasis added):

The  idea would be to help moderate elements establish reliable safe zones within Syria once they were able. American, as well as Saudi and Turkish and British and Jordanian and other Arab forces would act in support, not only from the air but eventually on the ground via the  presence  of  special  forces  as  well. The  approach would  benefit  from  Syria’s open desert  terrain  which  could  allow  creation  of  buffer  zones  that could  be  monitored  for possible  signs  of  enemy  attack  through  a  combination  of  technologies, patrols,  and other methods that outside special forces could help Syrian local fighters set up.

Were Assad foolish enough to challenge these zones, even if he somehow forced the withdrawal  of  the  outside  special  forces,  he  would  be  likely  to  lose  his  air power  in ensuing  retaliatory  strikes  by  outside  forces,  depriving  his  military  of  one  of its  few advantages over ISIL.Thus, he would be unlikely to do this.

Unfortunately for US policymakers, little justification or public support underpins any of these plans to intervene more directly in Syria in pursuit of what is obviously regime change dressed up as anything but.

Bring in the Refugees
However, in hopes of solving this lack of public support, the West appears to have taken a huge number of refugees created by its years of war upon the Middle East and North Africa, and suddenly releasing them in a deluge upon Europe. The Western media itself implicates Turkey as the source of these refugees, and reports like that from the International New York Times’ Greek Kathimerini paper, in an article titled, “Refugee flow linked to Turkish policy shift,” claims (emphasis added):

A sharp increase in the influx of migrants and refugees, mostly from Syria, into Greece is due in part to a shift in Turkey’s geopolitical tactics, according to diplomatic sources.

These officials link the wave of migrants into the eastern Aegean to political pressures in neighboring Turkey, which is bracing for snap elections in November, and to a recent decision by Ankara to join the US in bombing Islamic State targets in Syria. The analyses of several officials indicate that the influx from neighboring Turkey is taking place as Turkish officials look the other way or actively promote the exodus.

This wasn’t done until after years of staged terror attacks across Europe, in attempts to ratchet up fear, xenophobia, racism, and Islamophobia. Every attack without exception involved patsies tracked by Western intelligence agencies in some cases for almost a decade. Many had traveled to and participated in NATO’s proxy war on Syria, Iraq, and Yemen before returning home to carry out predictable acts of violence.

Image: Even Western “international” organizations find it difficult to hide NATO’s role in the refugee crisis with most migrants transiting through NATO-destroyed Libya, and NATO-member Turkey.

In the case of the infamous “Charlie Hebo” massacre, French security agencies followed the gunmen for years – even arresting and imprisoning one briefly. This surveillance continued up to but not including the final six months needed for them to plan and carry out their final act of violence. When asked why French security agencies ended their surveillance of known terrorists, they cited a lack of funds.

With Europeans intentionally put into a state of fear at home and in hopes of eliciting support for wars abroad NATO appears to now be undulating Europe with a tidal wave or refugees intentionally accumulated and cared for in Turkey either to flood back into NATO-established safe zones in Syria or into Europe to extort from the public backing for further military aggression.

The Huffington Post’s article, “David Cameron Facing Pressure To Bomb Islamic State In Syria After Lord Carey Calls To Group To Be ‘Crushed’,” in covering the political discourse in England provides us with the final reveal of what was really behind this sudden “crisis.

David Cameron is facing growing pressure to extend RAF air strikes into Syria as the worsening conflict threatened to drive increasing numbers of desperate refugees to seek sanctuary in Europe.

Former Archbishop of Canterbury Lord Carey became the latest senior figure to call for a renewed military effort to “crush” Islamic State (IS) in its Syrian heartlands.

He also backed calls for British military intervention to help create “safe enclaves” within the country where civilians would be protected from attack by the warring parties in Syria’s bloody civil war.

His intervention came after Chancellor George Osborne acknowledged that a comprehensive plan was needed to tackle the refugee crisis “at source”.

Speaking to reporters at a meeting of G20 finance ministers in Turkey on Saturday, he said that meant dealing with the “evil” regime of Syrian president Bashar al-Assad as well as the militant jihadists of IS.

At the end of the day, the “refugee crisis” is yet another contrivance by the same special interests who first sought to intervene in Syria to back “freedom fighters,” then to stop the use of “WMDs,” and most recently to fight “ISIS.” Now with all three failing to justify what is otherwise naked military aggression openly pursuing regime change in Syria as a basis for wider confrontation with Iran, Russia, and even China, “refugees” are being used as human pawns to provoke fear and rage across Europe.