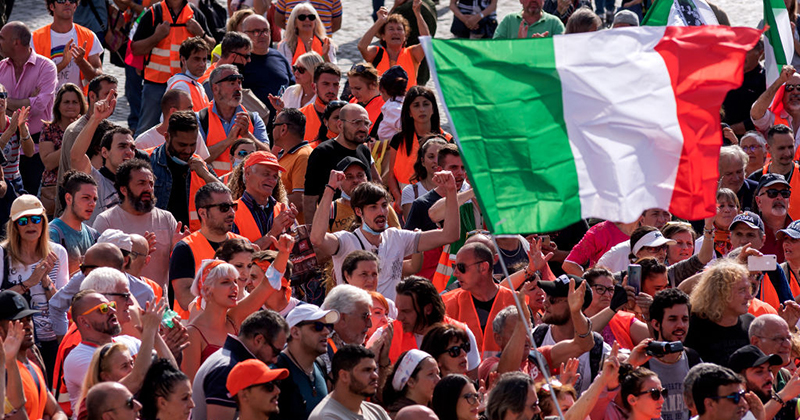 Hundreds of Italian demonstrators gathered in Rome’s Piazza del Popolo on Tuesday, ditching their masks in a protest against the Italian government’s lockdown restrictions aimed at controlling the spread of COVID-19.

The group, which calls themselves the ‘Orange Vests,’ is led by retired Carabinieri general Antonio Pappalardo, who doesn’t believe children should be made to wear masks, according to TIME.

Refusing to wear a mask himself, Pappalardo said “These lungs mine. I will take care of my lungs. Breathing is sacred.”

The people packing the square didn’t adhere to social-distancing guidelines set by the government.

Pappalardo portrayed such containment measures as an infringement of freedom. Other speakers at the protest asserted that the pandemic ‘’never existed’’ and alleged that politicians had played it up to enhance their own powers. –TIME

Elsewhere in Rome, opposition leaders, including League Party chief Matteo Salvini, marched on Tuesday to demand that the government resign.

Unveiling an Italian flag along the Via del Corso, Rome’s central artery, the gathering soon turned into a procession led by Salvini and two other party leaders: Giorgia Meloni of the right-wing Brothers of Italy, and Antonio Tajani, who co-founded former PM Silvio Berlusconi’s center-right Forza Italia, according to France24.

According to a Facebook post by Salvini, the march was “a symbolic gesture to make heard the voices of the citizens who do not give up.”

As Italy faces the worst recession since the war, the crisis could further bolster the far-right with the country scrambling to support businesses.

“There is an immediate need for money for the Italians, yet we are promised the recovery fund in 2021,” Salvini told reporters, referring to the 750-billion-euro European recovery plan.

“There can be no forgotten Italian workers,” he added.

He also expressed opposition to the government’s decision to temporarily allow illegal migrants to work on the land or as domestic helpers. –France24

Salvini was spared standing trial last week by a special committee over allegations of illegally detaining migrants at sea.