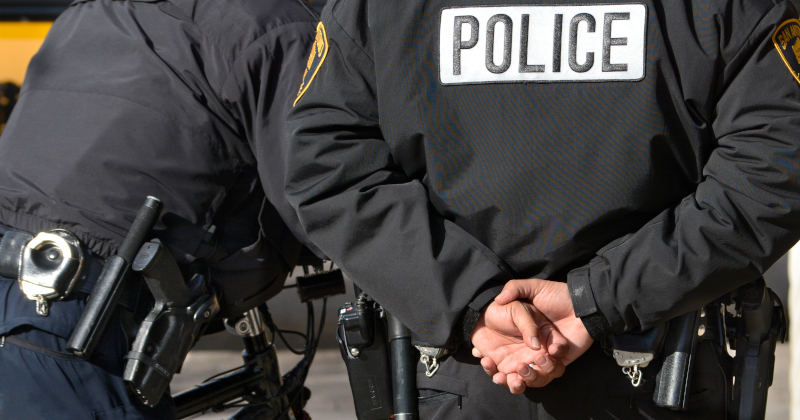 Update (1630ET): The Buffalo police union president has reportedly sent an email following the suspension without pay of two Emergency Response Team (ERT) officers who were caught on camera pushing a 75-year-old protester onto the sidewalk, causing him to bleed from the head.

“After witnessing first hand how these 2 officers were treated. I can tell you, they tried to fuck over these guys like I have never seen in my 54 years. It is despicable to say the least the treatment they have received from this Administration as well as DA John Flynn and his ADA Gary Hackbush,” reads an email allegedly sent by PBA President John Evans.

Evans goes on to say that the police union won’t pay for legal costs of officers related to protests, as it could put a “serious dent in the PBA’s funds. OVER BULLSHIT!”

BREAKING: Buffalo police union president reportedly says the suspension of 2 cops for shoving an elderly man was “disposable.” He goes on to say the union shouldn’t pay for the officers’ defense because it could the District Attorney could put a “serious dent in the PBA’s funds.” https://t.co/D2TaeIORIg

Meanwhile, the entire police unit in Buffalo that responds to protests resigned Friday in solidarity with the two officers, The Buffalo News reported.

“If they resigned, I’m exceptionally disappointed by it because it indicates to me that they did not see anything wrong with the actions last night,” Poloncarz said after being asked about the ERT Team resigning. pic.twitter.com/gbQ4Z7vKr5

The officers did not quit the force but only resigned from the unit responding to protest and civil unrest, the paper reported.

The Buffalo, New York Police Department has suspended two officers without pay and launched an Internal Affairs investigation after a viral video showed the cops shoving a 75-year-old protester onto a concrete sidewalk as police cleared Niagra Square during enforcement of a citywide curfew.

The man can be seen bleeding from the head following the incident.

According to the Buffalo News, the incident occurred several hours after a standoff between police in riot gear and protesters, who where blocking the street in front of City Hall.

Buffalo Mayor Byron Brown – who told protesters in Niagra Square on Thursday that he will formally outlaw the use of choke holds on suspects by the Buffalo PD – said that the man was “knocked down” by officers.

A 7 Eyewitness News reporter captured video showing the aftermath of the incident. Protesters can be heard reacting to the man’s fall. The man is now in stable but serious condition at Erie County Medical Center.

7 Eyewitness News has learned Buffalo Police Commissioner Byron Lockwood has ordered the suspension of the officers involved in the incident. –WKBW

Tonight, after a physical altercation between two separate groups of protesters participating in an illegal demonstration beyond the curfew, two Buffalo Police officers knocked down a 75-year-old man. The victim is in stable but serious condition at ECMC. I was deeply disturbed by the video, as was Buffalo Police Commissioner Byron Lockwood. He directed an immediate investigation into the matter, and the two officers have been suspended without pay. After days of peaceful protests and several meetings between myself, Police leadership and members of the community, tonight’s event is disheartening. I hope to continue to build on the progress we have achieved as we work together to address racial injustice and inequity in the City of Buffalo. My thoughts are with the victim tonight.

Governor Andrew Cuomo weighed in as well, tweeting “This incident is wholly unjustified and utterly disgraceful.”

“I’ve spoken with Buffalo @MayorByronBrown and we agree that the officers involved should be immediately suspended pending a formal investigation.”

This incident is wholly unjustified and utterly disgraceful.

I’ve spoken with Buffalo @MayorByronBrown and we agree that the officers involved should be immediately suspended pending a formal investigation.

Police Officers must enforce — NOT ABUSE — the law. https://t.co/EYIbTlXnPt

You have the video.

The New York ACLU also weighed in, saying in a statment “The casual cruelty demonstrated by Buffalo police officers tonight is gut-wrenching and unacceptable. Suspensions and an investigation are already in order, but there is little more we have to see to know what took place.”

Police officers cannot continue to hide behind the lie that they are protecting and serving.

Reporter Seraphim Miller is forcibly removed from BLM rally for not wearing a mask.