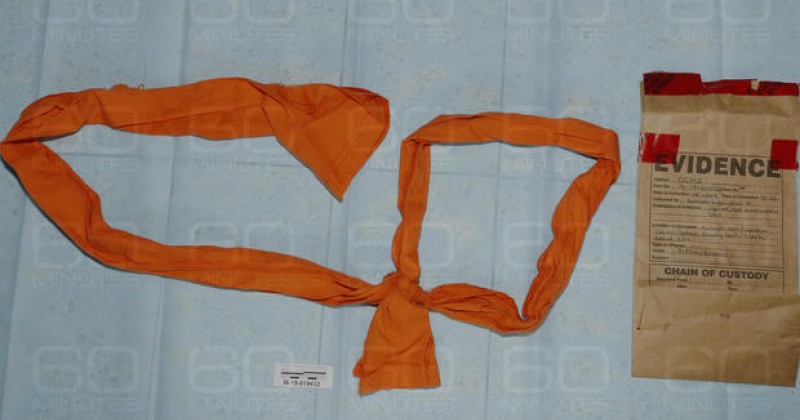 The first image of the noose supposedly used by Jeffrey Epstein contradicts the official story of his alleged “suicide.”

A picture of the noose was broadcast by CBS News last night during 60 Minutes.

“The forensic evidence released so far, including autopsy, point much more to murder… [but] I hesitate to make a final opinion, until all the evidence is in.”

Dr. Michael Baden, a renowned forensic pathologist, is investigating the death on behalf of his Epstein’s brother. pic.twitter.com/rVO73WhH5P

It shows a clean cloth with so signs of blood stains despite the fact that Epstein’s neck was bloody.

The noose is also hemmed at either end, with no sign of it being cut, contradicting the official explanation that Epstein’s body was cut down by the jail guard who found him.

“The EMS people normally, and especially in a jail, should not move a dead body.”

Federal prison protocol was not followed after Jeffrey Epstein was found unresponsive in his cell. https://t.co/uhobs7dnNn pic.twitter.com/dwVI3TFjcK

“It doesn’t look like anybody ever took scissors to it,” said 60 Minutes’ Sharyn Alfonsi. “So there is some question—is that the right noose?”

The circumstances surrounding Jeffrey Epstein being put on suicide watch after an alleged attempt to take his own life are in dispute. Epstein told his lawyers he didn’t try to kill himself, he was attacked by a cellmate. https://t.co/WPETR6hWZl pic.twitter.com/3e8Zbiydkz

“There were fractures of the left, the right thyroid cartilage and the left hyoid bone,” said Baden. “I have never seen three fractures like this in a suicidal hanging.”

“Going over a thousand jail hangings, suicides in the New York City state prisons over the past 40-50 years, no one had three fractures,” he added.

Other unanswered questions remain; Why was Epstein taken off suicide watch? Why did his jail guards fail to properly keep check on him and why did surveillance cameras recording his cell fail?

“I have never seen three fractures like this in a suicidal hanging.”