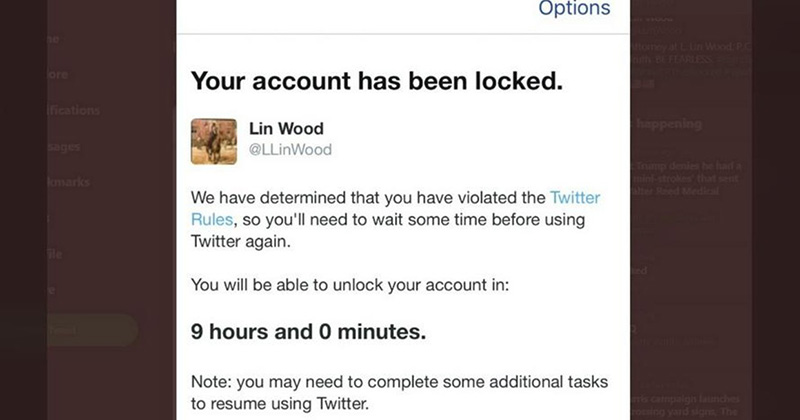 Conservatives are up in metaphorical arms after Twitter locked out the account of Lin Wood, the attorney who launched a defense fund for alleged Kenosha shooter Kyle Rittenhouse, saying he somehow violated their rules.

Wood is the attorney who won sizable settlements for Covington Catholic student Nick Sandmann in defamation suits against CNN and the Washington Post. Last week, he volunteered to represent Rittenhouse pro bono and set up a legal defense fund for him.

We will not allow our 1st amendment freedom of speech to be taken from us!

In January, I’ll be a Congresswoman.

One of the theories making the rounds is that Wood is linked to ‘QAnon,’ the conspiracy-minded community blanket-banned by Twitter back in July over alleged potential for “real world harm.”

As the left becomes more and more violent and unhinged we see “author” Vicky Osterweil lionizing the rioters saying looting strikes at the heart of “whiteness”. As well as churches pushing the satanic, Marxist agenda of BLM.

Marjorie Taylor Greene, a Republican congressional candidate denounced by mainstream media as a QAnon supporter for saying the mysterious figure had “given clues” that “have really proven to be true,” said Wood was her attorney. He also has the hashtag #WWG1WGA (“Where We Go One, We Go All”), commonly used by Q aficionados, in his Twitter bio.

It is just as likely that Wood’s timeout might be related to his work defending Rittenhouse, however. The 17-year-old lifeguard is accused of shooting three of the rioters in Kenosha, Wisconsin last week, two of them fatally. His attorneys argue it was legitimate self-defense. Expressing that sentiment on Twitter, however, can get one (figuratively) locked up.

Over the weekend, journalist Cassandra Fairbanks got a 12-hour suspension for tweeting that Rittenhouse “did nothing wrong.” It happened to be an exact quote from his attorneys’ statement to the press, but to Twitter, it represented “content that condones or celebrates acts of violence.”

Cassandra (@CassandraRules) was just suspended for 12 hours for defending the 17-year-old. His name is apparently now unspeakable on Twitter in any positive light. pic.twitter.com/xhBF4j5YjG

In the notification sent to Fairbanks, Twitter also included some rather interesting verbiage about glorification of mass murder and genocide being banned – but only “when protected categories have been the primary target or victims.” Neither mass murder or genocide are relevant to the Kenosha incident, however.

Wood’s temporary ban also comes as hundreds of Twitter users have been sending him evidence of media outlets, celebrities and politicians making defamatory statements about Rittenhouse, and urging him to take them to court Sandmann-style.

Twitter isn’t the only online platform censoring people for expressing support for Rittenhouse. GoFundMe was quick to shut down a fundraiser for his legal aid, while actively promoting a campaign for one of the men he shot, describing him as a “hero” who “gave his life” trying to save others.

BREAKING: @LLinWood has been locked out of his account.

This comes days after he began working as part of Kyle Rittenhouse's defense team.

President Donald Trump signed an executive order in May that would see those protections stripped if platforms engage in practices that are “deceptive” or “pretextual,” inconsistent with their own terms of service, or used to stifle viewpoints with which they disagree. The deadline to submit public comments on the proposed changes to the Federal Communications Commission is on Wednesday.