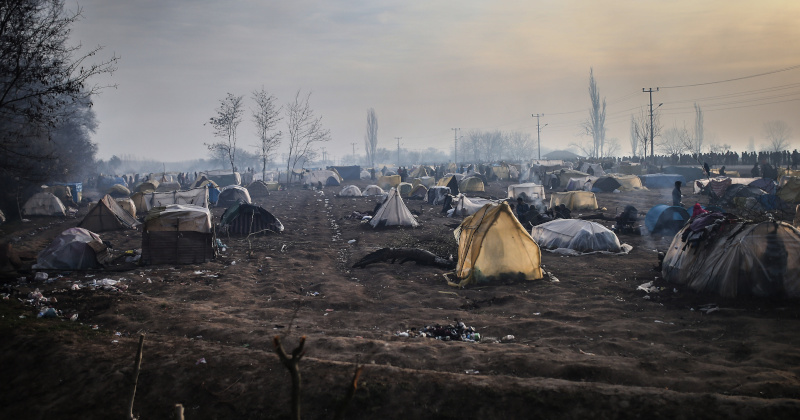 Ankara opened its borders with Europe to would-be migrants late last month amid an escalation of fighting between Turkish and Syrian troops in Syria’s Idlib province.

Since then, Turkish authorities have threatened to send “millions” of refugees to Europe, and suggested that the 2016 migrant agreement needs to be renegotiated.

Turkish President Recep Tayyip Erdogan estimates that about 150,000 refugees have already made it into Greece, and is calling on Athens to ‘open the gates’ to allow these people to head to wealthier European countries.

“We fed and gave drink to refugees for the last nine years. Now they want to go to Europe. I have long said: if you don’t share the burden with us, we will open the gates. They thought I was joking. But I opened the gates. Now our guests are leaving; we are not required to hold them. About 150,000 people have gone to Greece. [Greek authorities] are now trying to send them back to us using force,” Erdogan said, speaking to members of the ruling Justice and Development Party on Wednesday.

The Turkish president advised Athens to “open their gates” and to “let [migrants] travel through your territory to richer countries. But no one says anything to Greece, which is committing a crime against humanity by attacking refugees. It’s barbaric to shoot people who want to save their lives and to build a future for their children,” he said.

According to Erdogan, “there is no difference between what the Nazis did and those images from the Greek border”. From the context of the statement, it seemed that the Turkish president was comparing the Greeks to Nazis, rather than referencing the invasion and subsequent occupation of Greece by Nazi Germany in April, 1941.

Erdogan also accused the EU of failing to fulfil its obligations vis-à-vis Turkey under the March 2016 migrant deal, and vowed that Turkey would not close its borders with the EU to refugees until the bloc makes good on its commitments.

“We will continue the current measures on our borders until all of our expectations are concretely met,” he said. “Europe has not kept its word – neither regarding financial support for refugees, nor on the promise to cancel visas” for Turkish nationals, he added.

Brussels has previously said that 2.4 billion euros in assistance was distributed to Turkey by late 2019 under the 2016 deal.

Turkish and EU officials are expected to come up with a “road map” on the migrant issue ahead of the EU summit to be held in late March. On Tuesday, Turkish Foreign Minister Mevlut Cavusoglu said that in addition to the visa issue, Turkey expects the EU to update the terms of Turkey’s customs union with the bloc.

Earlier, German Foreign Minister Heiko Maas warned Ankara against using the migrant crisis issue as a “bargaining chip” in talks with Europe, and called on Ankara to stick to its part of the 2016 deal.

Under the 2016 deal, the EU is obligated to provide Turkey with over $3 billion to assist Syrian migrants who fled to Turkey during the foreign-backed civil conflict in Syria. Both sides also agreed to “re-energise” talks on Ankara’s possible accession into the bloc.

In return, Turkey promised to stop the flow of refugees and would-be economic migrants.