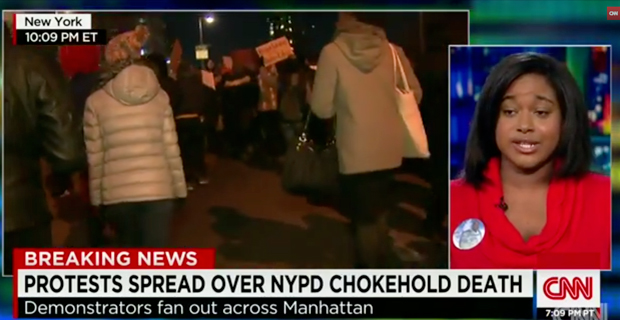 The daughter of Eric Garner, the man choked to death last July in New York City for the crime of selling loose cigarettes, revealed to CNN that she did not consider race to be a factor leading to her father’s murder.

Speaking with CNN’s Don Lemon following Wednesday’s grand jury decision not to indict the officer responsible for Garner’s death, Erica Garner said she felt the issue was a microcosm of the larger problem of police brutality, which has come to affect virtually all walks of life equally.

“This is not a black and white issue,” Garner told Lemon. “This is a national crisis. Like… I believe this is a crisis.”

Garner added that she felt a sense of solidarity with people of different cultures after she saw the amount of support her family received from around the world:

Garner even stood her ground after a determined Lemon attempted to have her play to the racial narrative.

“Are you saying this is not an issue of race? I’m sure… You think this is a racial issue?” Lemon again asked.

“I really doubt it. It was about the officer’s pride. It was about my father being 6’4″ and 350 pounds and he wants to be the top cop that brings a big man down,” Garner answered.

Garner’s opinion greatly differs from protesters who are actively embracing the push to conflate the issue of police brutality with racism.

“This young lady is absolutely right,” writes the Young Cons’ Michael Cantrell. “What transpired between NYPD and Eric Garner wasn’t about the color of his skin. It’s about whether or not a police officer was using excessive force when it wasn’t necessary.”

“Garner’s daughter is right on the money about this being a critical issue facing the nation. There have been many stories in the news about law enforcement stepping over the line of appropriate action, and the victims have been folks of all races,” Cantrell writes.

It certainly is refreshing to see that people on the inside of the issue aren’t falling for the race-baiting tactics of Rev. Al Sharpton or the race war instigating corporate media.