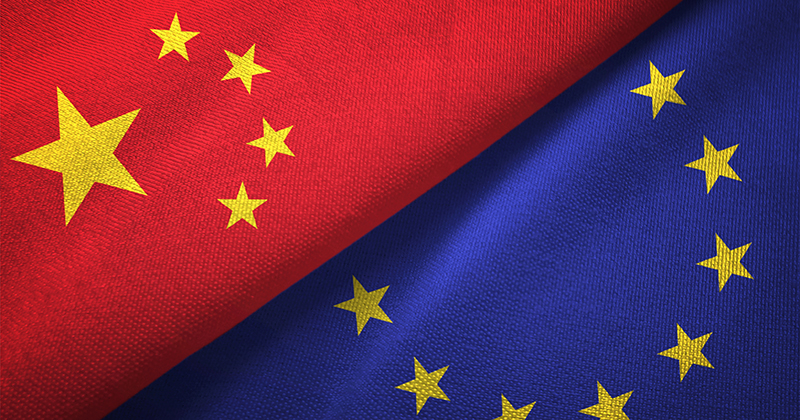 EU leaders bowed to China this week, softening their criticism of the communist regime in a report documenting how governments have pushed disinformation about the coronavirus pandemic.

“China has continued to run a global disinformation campaign to deflect blame for the outbreak of the pandemic and improve its international image,” read the initial report, according to a copy seen by the New York Times. “Both overt and covert tactics have been observed.”

It cited Beijing’s efforts to curtail mentions of the virus’s origins in China, in part by blaming the United States for spreading the disease internationally.

It noted that Beijing had criticized France as slow to respond to the pandemic and had pushed false accusations that French politicians used racist slurs against the head of the World Health Organization.

But after China ‘moved quickly to block the document’s release,’ European officials immediately delayed – and then rewrote the document which “diluted the focus on China, a vital trading partner.”

“The Chinese are already threatening with reactions if the report comes out,” said EU diplomat Lutz Güllner in a Tuesday email seen by The Times.

We’re turning into China. A new virus coming from Wuhan — totalitarian tyranny. Here’s the new “normal” in Wuhan that will be here faster than they can ship products to Walmart

Notably, the sentence about China’s “global disinformation” campaign was shelved, as well as the claims made against France, along with other language.

It’s near-universal knowledge (outside of China) that the CCP muzzled doctors and journalists who were reporting facts about the Wuhan coronavirus as the virus began to spread out of control late last year – while the Trump administration has consistently blamed China for their poor handling of the outbreak, as well as spreading false information about the disease, such as whether it was transmissible between humans.

President Trump said last week that his government was trying to figure out whether the virus came from a Chinese lab, while China has accused the American government of trying to distract the public from its own mistakes. –NYT

The European Union, meanwhile, was set to issue its report on Tuesday – until Chinese officials “quickly contacted the European Union’s representatives in Beijing to try to kill the report,” according to two diplomats.

The Times notes that the report’s alteration comes at a time when the EU is trying to get better treatment for its companies in China, with two-way trade estimated at over $1.6 billion per day before the pandemic. Both German automakers and French farmers are among the EU industries which heavily rely on Chinese exports, according to the report.

EU spokesman Peter Stano said on Friday that the report hadn’t been delayed, saying “It is ready once it is complete, cleared in an editorial process and ready to be uploaded.”

Except on Tuesday morning, an email which circulated within the disinformation task force with the subject line: “READY for publication.” The report was reportedly approved and a summary was moments away from publication after it was ordered held by Esther Osorio – a senior adviser to the EU’s top diplomat, Josep Borrell, according to the Journal, citing an email.

Central and Eastern Europe, in particular, are a hotbed for disinformation tactics, diplomats say. “Poland is the petri dish for Russia and China to try out their disinformation, their trolls and bots,” the American ambassador in Poland, Georgette Mosbacher, said in an interview on Thursday.

As officials in Brussels delayed publishing their report, Chinese officials in Beijing kept up the pressure with at least two high-level calls to the European representatives there, according to emails and interviews with diplomats. Chinese officials expressed alarm at the news of a coming report and urged the bloc not to release the document. –NYT

According to the report, Osorio asked analysts to revise the document and lighten up on China and Russia to avoid accusations of bias – making sure they differentiated between ‘pushing disinformation and aggressively pushing a narrative.’

“Such appeasement will set a terrible precedent and encourage similar coercion in the future,” said analyst Monika Richter, adding that EU diplomats are “self-censoring to appease the Chinese Communist Party.“