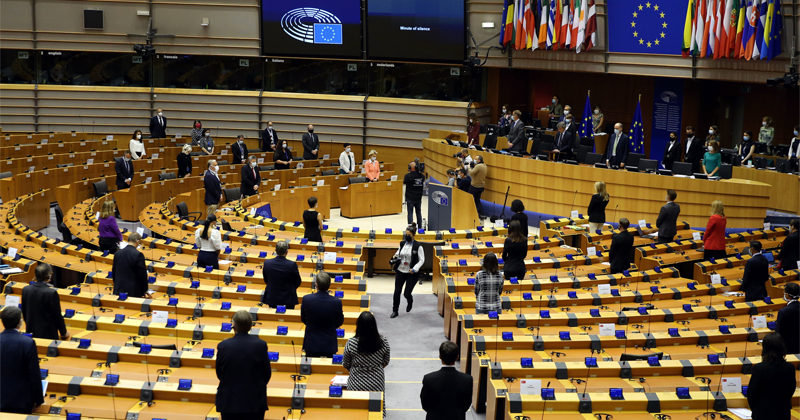 A lengthy resolution by the European Union legislators denounced US President Donald Trump for wanting to use force against rioters and condemned the “appalling death of George Floyd” and arrests of journalists.

In a 11-page resolution adopted on Friday with 493 votes in favor to 104 opposed – and 67 abstentions – the EU Parliament affirmed that “Black Lives Matter” and listed 36 more conclusions. The preamble ran out of letters of the alphabet.

Condemning the “appalling death of George Floyd” – a Minneapolis, Minnesota man who died during a botched arrest in late May – the EU parliamentarians also denounced “all forms of racism, hate and violence” as well as “Afrophobic traditions, such as the black face practice.”

They called on the US to “take decisive steps to address the structural racism and inequalities in the country, as reflected in police brutality” and condemned the “police crackdowns on peaceful US protesters and journalists.”

The EU Parliament also “strongly regrets the US President’s threat to deploy the US Army” to deal with the rioters. However, they blamed the riots on “extremist and anti-democratic forces which purposely misuse the peaceful protests to aggravate the conflicts with the intention of spreading disorder and anarchy.”

While denouncing the arrest of CNN reporter Omar Jimenez and his crew in Minneapolis as another example of racism, the EU Parliament praised freedom of the press as key to fighting racism.

Lest one thinks that means freedom of speech, however, the resolution noted that “racist and xenophobic speech is not covered by the freedom of expression” and denounced “all types of incidents of hate crime and hate speech, both offline and online.”

Leaving nothing to chance, “slogans that aim to undermine or detract from the Black Lives Matter movement and dilute its significance” were declared to be “white supremacism.”

Education, the parliamentarians said, is a “key tool to end structural discrimination and racism in our societies,” with the crucial role in “deconstructing prejudices and stereotypes, promoting tolerance, understanding and diversity.”

Neither the White House nor the State Department have yet commented on this blatant meddling into internal US affairs.