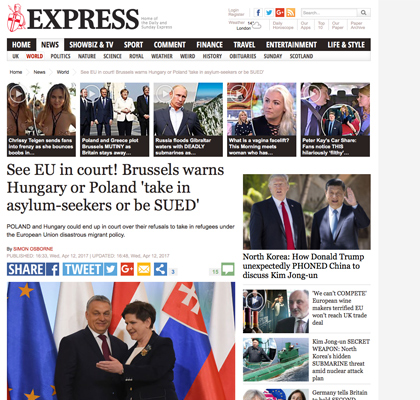 The European Union Commission has threatened to take defiant EU member states like Hungary and Poland to court if they continue to defy their migrant relocation policy.

Hungary and Poland have so far refused to take part in the EU’s scheme to move 160,000 migrants from Italy to Greece – the main entry points –  to elsewhere in the EU.

“If member states do not increase their relocations soon, the Commission will not hesitate to make use of its powers for those which have not complied,” stated a Commission spokesman.

Hungary has filed its own lawsuit against the migrant relocation policy and a hearing at the European Court of Justice is due next month.

The Commission’s legal threats apply especially to Hungary due to an emerging bill that could shut down a Budapest university founded by globalist billionaire George Soros as part of a wider crackdown of groups he started in Europe.

“Taken cumulatively, the overall situation in Hungary is cause for concern,” First Vice President Frans Timmermans said at a news conference, adding that the Soros-backed Central European University (CEU) was a “pearl” that must be protected.

The EU has “resolved to use all the instruments at our disposal under the Treaties to uphold the values on which our Union is grounded,” Timmermans said. “The vision of an open society, of a diverse society is under threat.”

The EU has threatened member states before, with several policy chiefs saying that the bloc could fine them €250,000 for every migrant they refuse to accept.

The EU’s foreign policy chief Federica Mogherini has made it clear that the bloc has no intention of sealing the borders to reduce the overflow of Muslim migrants.

“Let me be totally clear from the very beginning: Europe does not and will not close its doors,” she said.