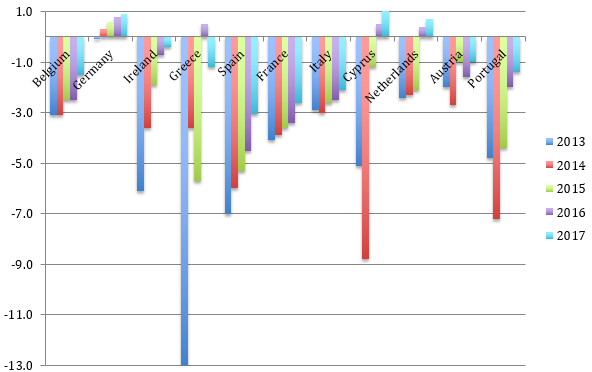 In 2017, for the first time ever, all Eurozone countries had a government deficit below 3% of GDP, thereby complying with the Stability and Growth Pact.

Does this mean that the euro crisis is officially over? Have pessimists been wrong?

Can governments boost government spending as they rejoice?

There are several reasons why the euro crisis is far from being over and government finances still unsustainable.

First, we should not forget that the Stability and Growth Pact has been tightened by the stricter European Fiscal Compact or Fiscal Stability Treaty signed by all member states. Germany had demanded this tightening in exchange for its support for the European Stability Mechanism (ESM), the permanent European bailout fund. As deficits in the past had been in some countries near the 3% limit in good times and exploded during recessions, the new Fiscal Stability Treaty makes a (structurally) balanced budget obligatory. A 0.5% deficit (1% if government debts are below 60% of GDP) is still considered to be a balanced budget. Only in a recession the deficit is allowed to rise up to 3% of GDP. Yet, this is an exception and must be compensated by budget surpluses in good times.

Moreover, the Fiscal Stability Treaty contains a “debt brake.” If government debts are greater than 60% of GDP, each year 5% of the excess debt should be cut. For instance, if a country´s debt to GDP ratio stood at 100%, the debt should drop 2% per year (5% of 40%). 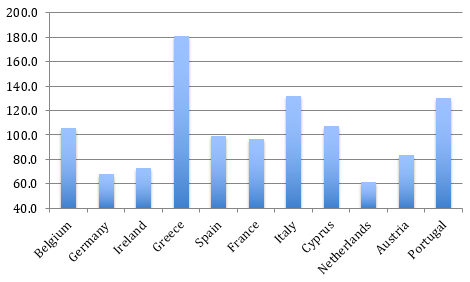 Source: Eurostat, in percent of GDP

Considering the data, we find that most countries violate the stricter Fiscal Stability Treaty because the Euro zone is not in a recession and countries should reduce their debt loads running budget surpluses. Yet, most countries still have deficits. Unfortunately, the new rules can be interpreted laxly. As long as a country is on an “adjustment path,” the correction in its finances is deemed to be sufficient.

Second, the ECB has aggressively lowered interest rates and started to buy government bonds directly (via “Outright Monetary Transactions”) in an outright violation of the Maastricht Treaty. At the same time, the Euro zone economy is growing. For some government bonds of short maturities, yields are negative. This situation is sweet for governments, but it is artificial and exceptional. In order to evaluate the long run stability of the euro, we have to consider the long-term debt sustainability at “normal” interest rates. If the interest rates on government debts rose by 3%, deficits would soar: see below the government deficits for 2017, if interest rates had been 3% higher.

Third, at the heart of the euro crisis there is an institutional problem. The euro is a misconstruction. Several independent government can indebt themselves through one central banking system. When a country runs a deficit giving goodies to its national voters, it issues government bonds. Banks can buy these bonds offering them as collateral to the ECB in order to get fresh loans (alternatively the ECB may buy these bonds directly). With the new central bank reserves, banks can expand credit and the money supply. Prices tend to rise, but not only in the deficit country but all over the Euro zone. In this way, the costs of government deficits are partially externalized on citizens of other Euro zone countries. Governments can distribute goodies and foreigners pay part of the bill in form of a lower purchasing power of the euro. The situation resembles a tragedy of the commons because all Euro zone governments have the incentive to use the mechanism to their benefits on costs of others. Moreover, a government profits more from this redistribution mechanism if it has a higher deficit than the rest. Otherwise prices may rise faster than nominal government spending. These perverse incentives are explosive and bound to destroy the common currency, if deficits are not controlled somehow.

What are the solutions to the euro´s construction problem?

One solution making the euro viable in the long run would be to strictly limit government spending and deficits, thereby limiting the commons. The Stability and Growth Pact has failed to do so with over 110 violations by member states until today. The Fiscal Stability Treaty does not do so substantially better considering negative interest rates and economic expansion. In fact, government spending has not been reduced from its 2007 bubble level but was actually increased in most countries. That means that the deficit has not fallen because governments cut their spending but mainly because of lower interest payments on government debts and the artificial economic expansion stimulated by monetary policy. 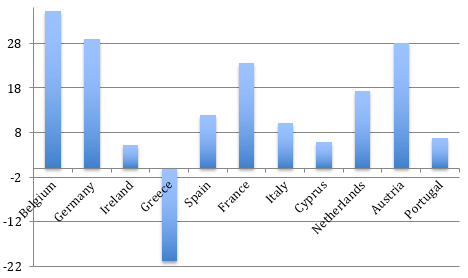 Source: Eurostat, own calculations, in percent

Another solution to the euro´s construction problem is to install a transfer union and finally a European State that manages national budgets and transfers wealth from the more thrifty to the more profligate governments. During the past years we have seen important steps in that direction with the ESM, the banking union, and the ECB’s direct purchase of government bonds. The Commission´s “Roadmap” for the deepening of the Economic and Monetary Union envisions further measures. The €500 bn. EMS is to be converted into a European Monetary Fund (EMF) to mitigate asymmetric shocks which implies that the costs of bad policies can be externalized onto other member states. The EMF is also designed to bail out banks implying the sharing of risks creating moral hazard. The Commission wants a European Minister of Economy and Finance. All these redistribution of wealth and risks reward past inaction and failure, promote moral hazard and imply more government spending.

A final solution to the problem of the euro would be to permit the break up of the Euro zone. The development of an orderly exit procedure with the possibility to remain within the EU would reduce the exit costs, increase the likelihood of an exit and thereby discipline governments.

Which of the three paths will be taken is still open, and might decided finally during the next recession.