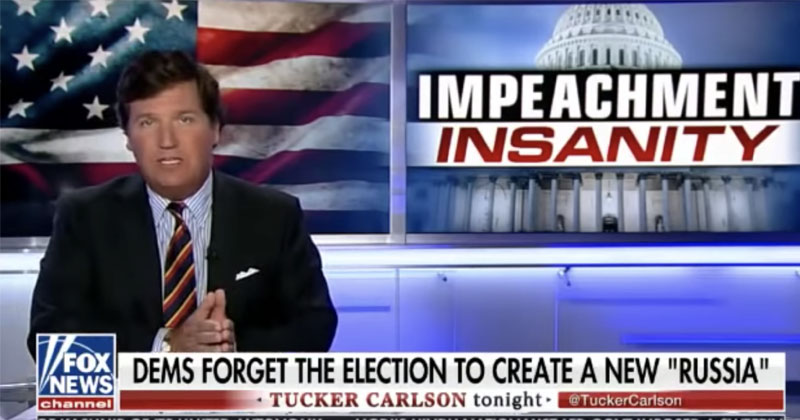 Fox News host Tucker Carlson broke down the renewed Deep State coup taking place against President Trump, pointing out that intelligence agencies are no longer arms of the government — instead, they practically run the government itself.

“For 230 years, this has been a republic with an elected president — elected. Over time, it’s worked pretty well,” Carlson said on his show Friday. “But now, without a single vote being held, no referendum on this at all, bureaucrats in Washington have decided to change the system.”

“They’d like a new form of government where America’s real rulers are the unelected bureaucrats in the intel agencies in Washington. They’re not kind of hiding this. They’ve been fighting for it pretty much openly since before Trump’s presidency began.”

The fact is, Deep State globalist embeds are trying to overturn the 2016 election and get Trump out of office before 2020.

This is the REAL election meddling.

“This is a public coup by the entitled, corrupt, snot-nosed leftists that have taken over U.S. intelligence agencies,” notes Infowars founder Alex Jones.

“Where they’re just publicly rubbing our face in it and openly spying on every facet of what the president does, spinning every activity, no matter how honorable or noble, into some type of massive fraud — all in an attempt to hamstring the future course of this nation struggling to break free from the multinational globalist squid.”

“Any problems Trump has are overshadowed by the entitlement and the corruption of the Deep State and all the bureaucracies that have grown around it,” Jones added. “It’s the new American royalty, and the sycophantic corporate media that runs around behind it, the Americans’ amnesia to how the stories are constantly changing, it’s just staggering.”

Bob Barr joins The Alex Jones Show, with constitutional attorney Robert Barnes sitting in on a panel exposing how President Trump can benefit from his impeachment proceedings.