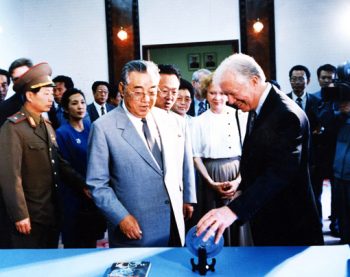 The message was delivered to the White House by South Korean national security adviser Chung Eui-yong, who met with Kim in North Korea on Monday. Kim has reportedly pledged to bring a halt to missile and nuclear weapons testing and accept the upcoming military exercise Foal Eagle, held annually by the U.S. and South Korea.

“He expressed his eagerness to meet President Trump as soon as possible,” Eui-yong said of the North Korean leader. “President Trump appreciated the briefing and said he would meet Kim Jong-Un by May to achieve permanent denuclearization.”

Trump took to Twitter Thursday evening, noting that a time and date for the meeting was currently in the works.

“Kim Jong Un talked about denuclearization with the South Korean Representatives, not just a freeze,” Trump wrote. “Also, no missile testing by North Korea during this period of time. Great progress being made but sanctions will remain until an agreement is reached. Meeting being planned!”

Kim Jong Un talked about denuclearization with the South Korean Representatives, not just a freeze. Also, no missile testing by North Korea during this period of time. Great progress being made but sanctions will remain until an agreement is reached. Meeting being planned!

While there is no reason to doubt South Korea’s account, North Korea has not yet publicly confirmed the comments surrounding denuclearization. In a statement to The Washington Post, Pak Song Il, North Korea’s ambassador to the United Nations, stated that by the “great courageous decision of our Supreme Leader, we can take the new aspect to secure the peace and stability in the Korean Peninsula and the East Asia region.”

“The United States should know and understand our position and should further contribute to the peace and security-building in the Korean Peninsula with [a] sincere position and serious attitude,” Pak added.

Pyongyang has attempted for well over 20 years to secure a face-to-face meeting with a sitting U.S. president. All previous presidents had refused the offer for numerous reasons, one being the fear that such a meeting would legitimize the rogue regime’s dictator as a credible world leader. While both Jimmy Carter and Bill Clinton at one point traveled to North Korea, both visits were made after leaving the Oval Office.

In fact, as noted by Jeffrey Lewis, director of the East Asia Nonproliferation Program at the Middlebury Institute of International Studies, the famous North Korean propaganda film “The Country I Saw” envisions a day when an American president, “compelled by North Korea’s nuclear and missile programs,” opts to treat Kim as an equal on the international stage.

This is not to say that Trump should reject the meeting. Instead, the White House should move forward with cautious optimism.

Although the precise calculus behind Kim’s decision for such a summit remains unknown, several factors are likely to have contributed to the decision, including the weight of sanctions on the regime, brought by the Trump administration’s “maximum pressure” campaign, and potential fears of a “bloody nose strike.”

And while Trump has injected a much-needed sense of urgency into the North Korea problem, Kim is entering into talks from a position of strength previously unseen from Pyongyang. Unlike during earlier attempts at a lasting détente, North Korea now has a nuclear and missile capability that has altered the balance of power and afforded the regime a greater bargaining ability.

How the summit will play out depends heavily on what both sides are aiming to achieve and willing to exchange.

Kim, despite allusions to an eventual denuclearization, will almost certainly never give up the very weapons North Korea has spent over four decades developing to ensure a deterrence to U.S. regime change.

North Korea has repeatedly made similar vows in the past, all which have ended in failure.

Both Koreas in 1992 signed the South-North Joint Declaration on the Denuclearization of the Korean Peninsula, pledging not to “test, manufacture, produce, receive, possess, store, deploy or use nuclear weapons.”

In 1994 as part of the Agreed Framework, Pyongyang stated its intention to freeze its plutonium weapons program in exchange for aid. The U.S. withdrew from the agreement in 2002 after it was learned North Korea had continued the nuclear program in secret.

After North Korea stated in 2003 that it had withdrawn from the nuclear Nonproliferation Treaty, which it originally signed in 1985, another attempt was made at negotiations that same year with the Six-Party Talks between China, Japan, North Korea, Russia, South Korea and the U.S. As part of those talks in 2005, North Korea pledged to abandon “all nuclear weapons and existing nuclear programs” and return to the nuclear Nonproliferation Treaty. The pledge fell through in 2009 after a North Korean rocket launch and disagreements over verification.

All of these failures granted North Korea the time necessary to continue, and, now according to Kim, fully develop its nuclear forces.

North Korea could merely be attempting once again to run out the clock in pursuit of further aims. A long-term goal of Pyongyang has been to drive a wedge between the U.S. and South Korea. If Kim can bring the U.S. into long rounds of talks while increasing relations and cooperation with the South, any later attempts to coerce North Korea into a preferable U.S. position will be even more politically difficult.

Even if a deal is secured by the Trump administration, verifying North Korean compliance is still another story.

A senior administration official who spoke to reporters Thursday argued though that Trump’s unorthodox approach is exactly what could make all the difference this time around.

North Korea’s initial offer will likely be sanctions relief in exchange for a weapons testing freeze, but other issues remain.

The Trump administration has repeatedly stated that such talks with North Korea could only begin on the condition of denuclearization. Pyongyang has asserted that denuclearization would only be entertained if the U.S. could guarantee the regime’s safety. Based on previous comments from Kim, regime safety equates to an end of the U.S. military presence in South Korea, an almost certain non-starter for the U.S., and thus the end of the Washington-Seoul alliance.

As noted by Duyeon Kim, senior research fellow at the Korean Peninsula Future Forum, Pyongyang’s definition of “denuclearization” has historically differed from that of Washington’s.

“During the Six Party Talks (from 2003 to 2008), Pyongyang demanded that the language in agreements (between the Koreas, Japan, China, Russia, and the United States) refer to ‘denuclearization of the Korean Peninsula’ instead of ‘denuclearization of North Korea’ as originally planned,” Duyeon Kim writes.

A U.S. promise not to threaten the regime in the future is also unlikely to convince Kim, who has previously pointed to U.S. policy in Iraq and Libya as proof of America’s ill-will. 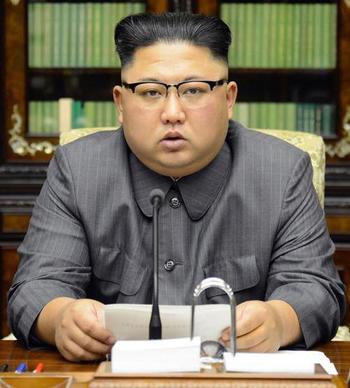 Taking into account the difficulties that lay ahead, the proposed talks still represent a positive step away from the nuclear brink. Even if denuclearization is unlikely, limiting North Korea’s program and restricting proliferation are more than worthwhile goals.

“But now, the hard work begins,” notes Daryl G. Kimball, executive director of the Arms Control Association. “Though President Trump deserves credit for being so bold as to agree to a summit meeting with North Korea by May, this is a process that will, if it is to succeed, require patience and persistence.”

“It is too much to expect that a single Trump-Kim summit no matter how intensively prepared will bring an immediate and lasting solution to the nuclear issue,” Kimball said. “But if the U.S. works closely and intensively with our South Korean allies in its approach to North Korea, a summit offers the potential for starting a serious process that could move us decisively away from the current crisis.”

The White House has rightfully pledged to keep its “maximum pressure” campaign in place for now ahead of any meetings. While the stakes are higher than ever, the Trump administration has a chance to achieve progress towards a long-sought peace on the Korean Peninsula.