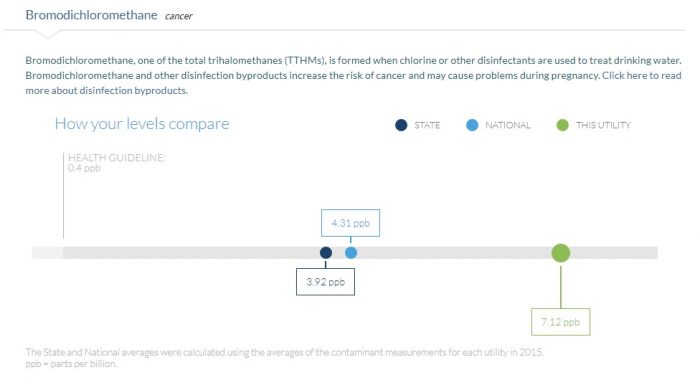 Your tap water might look crystal-clear, but there are a lot more contaminants floating around in there than you realize. An analysis of 28 million water records from nearly 500,000 American water utilities collected by the Environmental Working Group (EWG) reveals most Americans’ tap water contains contaminants at levels acceptable to the government, but may actually pose health risks to the people. [1]

The government doesn’t bother to impose requirements on hundreds of contaminants. Instead, health guidelines are issued by states and the federal government, but these are mere suggestions and goals. Amazingly, the guidelines are not enforceable by law. However, there is zero tolerance for the presence of any cancer-causing contaminant.

I went to the database and put in every zip code I’ve ever lived in – you can test your water here – and each one tested positive for higher-than-acceptable levels of at least 3 carcinogens, including chloroform. Yummy. The EWG found that tens of thousands of water utilities contain levels of cancer-causing contaminants. What’s more, every single zip code the group looked at turned up some form of contamination.

“We’re attempting to fill a huge gap here. I have not yet found any that have zero contaminants.” [2]

“Americans deserve the fullest picture possible of what’s in their tap water. But they won’t get that information from the government or, in many cases, from their utilities. The only place they’ll find that is EWG’s drinking water report.”

Cook noted that even if the contaminants in a water system fall below federal guidelines, that doesn’t mean the water is safe. This is because it has been 20 years since the U.S. Environmental Protection Agency (EPA) added a new contaminant to its list of regulated contaminants.

Since more than half of the contaminants found in U.S. tap water had no regulatory limit at all, the substances can be legally present even in high concentrations, and utilities must neither test for them nor inform residents about their presence.

“Just because your tap water gets a passing grade from the government doesn’t always mean it’s safe. It’s time to stop basing environmental regulations on political or economic compromises, and instead listen to what scientists say about the long-term effects of toxic chemicals and empower Americans to protect themselves from pollutants even as they demand the protective action they deserve from government.”

“One of the challenges for us was to first, get across the message that ‘legal’ isn’t safe.

The legal limits that are set for drinking water often include political and economic compromises. They’re not purely based on health limits, so that’s part of the education process.” [3]

Findings From The Analysis

According to the EWG, contaminants detected in the country’s tap water included:

Other concerning contaminants discovered by the analysis:

If you want to know what contaminants are in your tap water, the EWG published the database online. Input your zip code and find out why everyone should have a water filtration system.