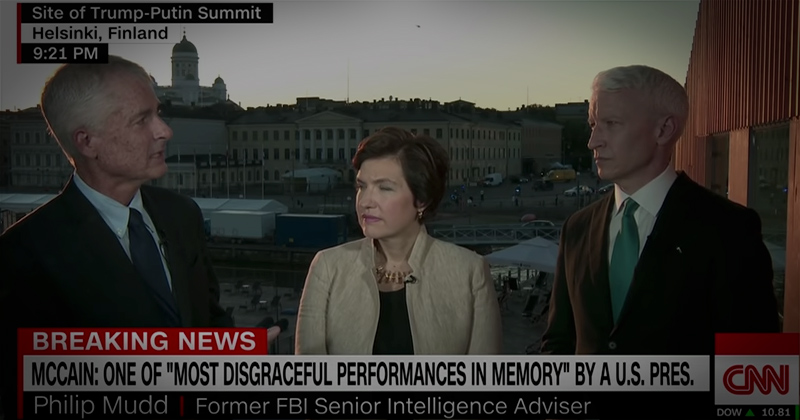 Following President Trump’s joint press conference with Russian President Vladimir Putin, Anderson Cooper asked Mudd if he agreed with John McCain who said the event was “one of the most disgraceful performances by an American president in memory.”

Cooper wondered, “Do you agree with that?”

Of course, Mudd agreed and went on to inquire about who will step up to oppose Trump.

“I mean, you have to step back even just a short time after this and say, ‘what next?’ You’ve seen senators come out. In the past, you’ve seen a senator who’s in the midst of a painful illness, Senator McCain, Senators like Jeff Flake who are leaving the Senate. Now you see Marco Rubio, still obviously in the fight, speaking out.”

He continued, “My question would be: when do members of the president’s inner circle say ‘look, we have an overseas dilemma where you are portraying us, in terms of the American government, as worse than a tyrant — that is, Vladimir Putin?’”

Mudd ominously proposed an insurrection against Trump, saying, “A curious point in American government: when do we see almost a shadow government come out and say ‘we cannot side with the government,’ whether it’s the Cabinet or the Senate. I think that’s the big question.”