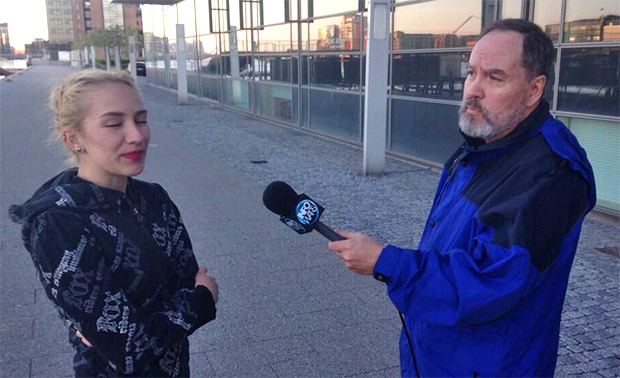 The Bilderberg conference in Copenhagen, Denmark is now underway. Most media outlets, with the exception of a handful of alternative media sites and The Guardian, are ignoring the event. Infowars, however, will put the gathering of elite power brokers and its secretive agenda front and center.

Infowars has obtained startling footage which shows individuals inside the Marriott Hotel, site of Bilderberg 2014, engaged in a bizarre homo-erotic hotel room photo shoot which was captured on camera:

Publicity-shy Bilderberg members were surprised to see Infowars journalists when they stepped outside for lunch at the site of the secretive confab today, with Google CEO Eric Schmidt, James Wolfensohn and Étienne Davignon all being caught on camera:

Infowars captured Bilderberg member Ed Balls’ conference files on camera during a security mix up when Balls couldn’t find his pass to enter the Marriott in Copenhagen:

Infowars.com reporter Josh Owens was detained by Danish Police after someone at a nearby hotel called the police on him for carrying around a camera:

Our on-the-ground team in Denmark will use social media to bring you the latest information and developments on the three-day event. Exclusive news and interviews will be aired on the Alex Jones Show. In addition to live coverage, Infowars.com features live and archival video from Copenhagen.

Alex has put up a web page where all Infowars.com stories and videos will appear. You can get to it here: http://www.infowars.com/b/.

In addition, breaking news will be tweeted out over Alex’s twitter, here: https://twitter.com/RealAlexJones

Additional coverage is also available on the PrisonPlanetLive Youtube page.

David Petraeus is on the loose in Copenhagen! #Bilderberg2014 pic.twitter.com/sOlRq98Pos