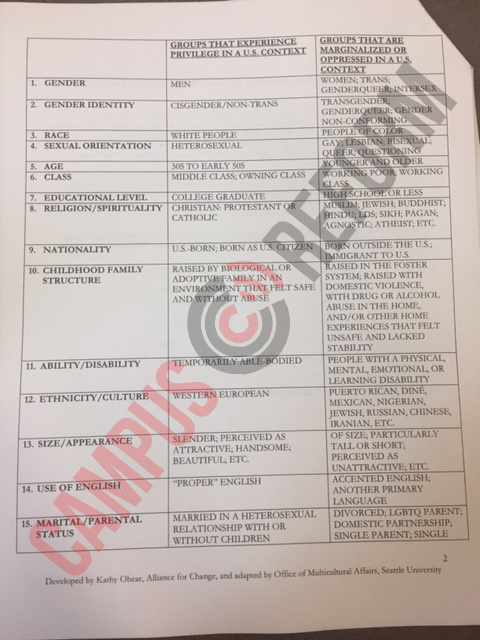 Student ambassadors at Cornell University were given an “orientation packet” ahead of welcoming the incoming freshman class. The packet contains a sheet of categories labeling certain groups as having “privilege” or being “oppressed.”

Campus Reform obtained a copy of the document from a concerned student who felt the content was inappropriate. The sheet outlines social issues and designates certain demographics as privileged or oppressed in a “U.S. Context.” The 15 categories range from gender identity to martial/parental status, education level, and “use of English.”

Over the course of three weeks, Campus Reform gave Cornell University multiple opportunities to confirm or deny the packet was distributed. University spokesman John Carberry eventually responded to Campus Reform on Wednesday but did not deny the student’s account, saying that Cornell “will not be participating” or commenting on the issue.

According to the document, if you speak “accented English” you are marginalized or oppressed compared to “‘proper’ English” speakers who are privileged. If your parents are married or “in a heterosexual relationship” you are privileged while “divorced; LGBTQ parent; domestic partnership” and “single parent” individuals are oppressed.

If you are “temporarily able-bodied,” you must have privilege according to the sheet as “people with a physical, mental, emotional, or learning disability” are oppressed. The document also lists “age” as a category, ranking those in their “30s to early 50s” privileged compared to “younger and older” demographics.

Altogether, if an incoming female Cornell student is a racial minority, has an accent, is in their late teens or early 20s, and was raised by a single parent, they are “marginalized or oppressed” in at least five ways despite their background, socioeconomic status, or life experiences.