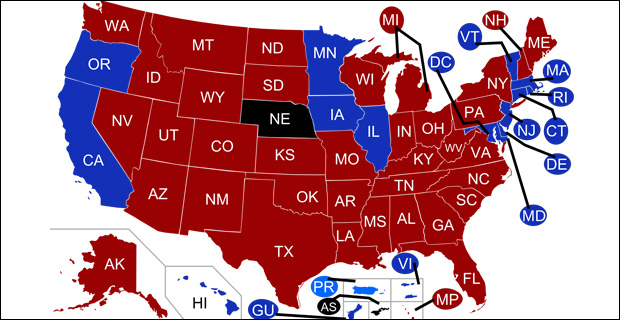 The Obama administration is mainly resettling migrants in Republican-controlled states, according to analysis.

Of the 19 states that took in the most refugees per capita in 2013 and 2014, 15 have upper house legislatures dominated by Republicans, a percentage of nearly 80%.

In comparison, only three of the 19 states are Democratic and another state, Nebraska, has a nonpartisan legislature but is considered a ‘red state’ in presidential elections.

Nearly 42% of Democratic states resettle the fewest refugees in comparison to 29% of Republican states.

The analysis was made by comparing a map of the U.S. state legislative upper house majorities as of 2015 to data released by the Office of Refugee Resettlement compiled by the Washington Post.

The results from the analysis aren’t surprising considering the Obama administration announced the White House Task Force on New Americans program in 2014 to convert recent migrants and refugees into “new Americans” with full voting rights.

“Critics say the program is not as much about creating ‘new Americans’ as it is about creating new ‘voters’ who will help re-elect Democrats and institutionalize Obama’s policies on immigration, education and healthcare for years to come,” Leo Hohmann of WND reported. “…The ‘welcoming’ mantra has been running hot within the Obama administration for several years and culminated with a report released April 17 by his White House Task Force on New Americans.”