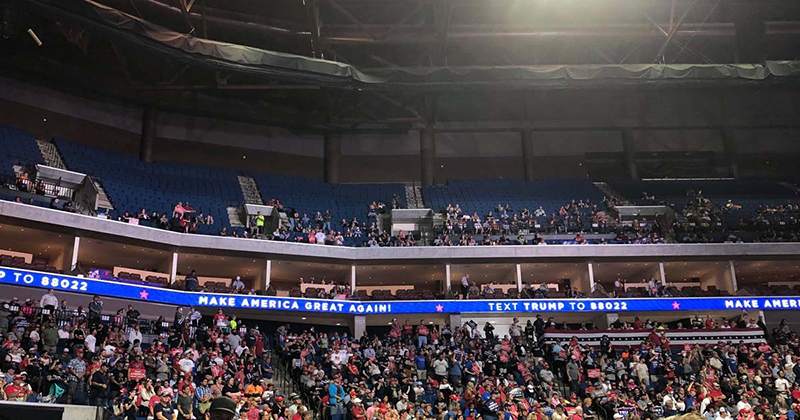 National File can confirm reports that the attendance at President Donald Trump’s rally seems to have faltered in Tulsa, Oklahoma, with an estimated 15,000 in attendance for a rally that the campaign claims had over 1 million requests for tickets.

National File reporters reveal that the attendance is down compared to previous claims, and that those in attendance seemed underwhelmed by some of the early speakers.

National File reporters say that the standing room area, typically filled during President Trump’s rallies, still had not reached capacity only 5 minutes before the president was scheduled to take the stage.

Don’t miss Owen as he goes to Tulsa to slay some cucks!

After first scheduling the rally for June 19, celebrated as Juneteenth by much of the African American community, President Trump later moved it to June 20.

President Trump, harried by the left for his original decision to schedule the rally during Juneteenth only weeks after the death of George Floyd in Minneapolis police custody, selected several African American speakers for the rally.

President Trump also cancelled an outdoor portion of the event after the smaller than anticipated attendance became obvious, with Secret Service clearing those who intended to attend the outdoor event from the area so the stage could be broken down, unused.

“Secret Service has moved crowd back from the overflow stage,” wrote The Washington Post’s Dave Weigel.

Secret Service has moved crowd back from the overflow stage so it can be broken down. pic.twitter.com/iIxXfnpOPn