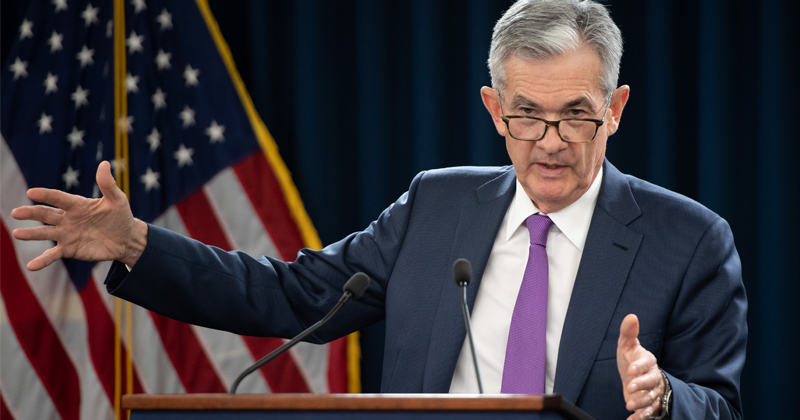 The Federal Reserve bases its monetary policy decisions on where it thinks the economy is heading.

The $64,000 question is how does it know? Or to put it another way, what makes us think a panel made up of a few economists and policy wonks can accurately predict the future and then make the “right” decisions?

During an interview on CNBC Squawk Ally, Jim Grant said we shouldn’t put this kind of faith in the Fed and that its monetary manipulations have created an environment of tremendous uncertainty.

“I think people are too certain about things about which they should not be certain.”

The Fed keeps telling us the economy is strong. Everything looks great.  But Grant said we are in uncharted territory when it comes to the economy. He called it a “moment that has no precedent.” We have $8.5 trillion in securities priced to yield less than zero worldwide. After inflation and taxes, there is no place on the yield curve where an investor is earning more than zero. By one measure, interest rates in 2016 were at the lowest level in 400 or 500 years.

“So, we are in an environment that’s extraordinarily accommodative. It’s essentially free capital. We’ve been in an era of essentially free money for many years. Free money is lovely. But spending it, people will do things they wouldn’t have done had that capital cost them something substantial.”

In other words, easy money leads to asset bubbles, malinvestments and unsustainable debt. In that environment, how can the Fed know what’s coming down the pike? Grant said there is a lack of certitude about the future.

Alex Jones joins Owen Shroyer to discuss how the Fed’s policies are destroying the economic boom under Trump.

Grant compared the Fed to the National Weather Service. Even with 4,200 employees, all of its sophisticated equipment and some 76 billion meteorological observations every year, the NWS gets it wrong quite frequently. As Grant put it, “it often misses a storm.”

“Notice a lack of improvement in the Federal Reserves forecast. The future is not the Fed’s best subject … I would say that we don’t know a lot and in view of these circumstances, the most extraordinary circumstances of our credit markets and capital markets, we ought to be prepared for all manner of outcomes, many of which are unscripted.”

Grant went on to say the Fed should shrink its balance sheet and allow interest rates to normalize.

“It would be lovely if we had rates that paid you something to invest in them. And it would be lovely if the Fed’s balance sheet were not in need of a program at Weight Watchers. But I think we ought not underestimate possible consequences of normalization.”

“If we normalize, that’s great. But we might have more days like yesterday [when the stock market tanked] than today [when it was up.]”

In other words, pushing toward normalization would likely tank the stock market – as we’ve seen over the last few months. It would also ultimately tank the economy — because an economy built on debt can’t march on in a high-interest rate environment. This is precisely why the Fed has turned a lot more dovish in recent weeks and we’re now seeing the Powell Put. The central bankers don’t have the fortitude to push forward. This is why Peter Schiff has said he thinks the tightening cycle is over and we will soon see a shift back to zero percent interest and QE4.

People like Jim and Peter have been hammering on this theme for years. This leads a lot of people to dismiss them, arguing that, “Well, you’ve been saying this and nothing has happened.” Grant said there are certainly things to do in the meantime – there are securities and investments to buy and sell. But we should always remember the big picture.

“It seems to me there’s nothing wrong with holding in the front of your mind, or at least not too far in the back of your mind, the fact that we live in this most extraordinary moment of monetary manipulation. Central banks the world over have commandeered financial markets in the interest of macroeconomic policy. The United States is not even the worst offender. The Japanese have destroyed their bond market … Mario Draghi has done almost the same in Europe.”

Grant also warned that despite all of the talk about muted inflation, it could sneak up on us very quickly.

Historians look back and find all kinds of reasons for these shifts – a bad harvest in Peru, mismanaged Fed policy, or a demographic shift.

“But I would observe, historically speaking, inflation, or changes in the price level, are often surprises. In fact, many things to us in markets come as surprises.”

Grant said he believes we live in “an age of inflation.”

“And I believe we will look back on this as a period in which inflation is building and that one-day inflation will be a ponderable number — say 4%. And this could happen in a couple of years. And 4% in this environment would be a very disturbing thing.”

Mike Adams exposes the Fed’s war against the prosperity of Americans.