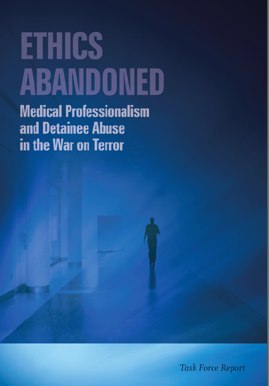 An independent report has highlighted ongoing violations of medical ethics at Guantánamo Bay and called on the Department of Defense (DoD) and the medical community, to conform to ethical principles. The Task Force on Preserving Medical Professionalism in National Security Detention Centers, claims that medical staff have been forced be act unethically.

“As a doctor who has been to Guantánamo and examined detainees, I am appalled that medical care there is controlled by command and security prerogatives,” complete disregard for fundamental medical ethics,” said Vincent Iacopino, of Physicians for Human Rights, a member of the task force. “It is time for the administration to end the inhuman and degrading practice of force-feeding and restore the ability of medical staff to act independently and according to their clinical and ethical obligations.”

The 269-page report, Ethics Abandoned: Medical Professionalism and Detainee Abuse in the ‘War on Terror,’ is based on two years of review of public records by the task force of 19 medical, military, ethics, public health, and legal experts.

The document discusses how medical personnel were used to establish and participate in torture practices. It also outlines how the DoD committed a number of ethical breaches, including improperly using health professionals during interrogations; implementing rules that permitted medical and psychological information obtained by health professionals to be used during interrogations; requiring medical staff to forgo independent medical judgment and force-feed competent detainees in violation of medical standards; and failing to adopt international standards for medical reporting of abuse against detainees.

The report also says that the CIA’s Office of Medical Services played a critical role in torture, including waterboarding. It also advised the Department of Justice that “enhanced interrogation” methods, such as extended sleep deprivation and waterboarding that are recognized as forms of torture, were medically acceptable. CIA medical personnel were present during administration of waterboarding, claims the Task Force.

“Putting on a uniform does not and should not abrogate the fundamental principles of medical professionalism,” said David Rothman, of the Institute for Medicine as a Profession, a sponsor of the report. “‘Do no harm’ and ‘put patient interest first’ must apply to all physicians regardless of where they practice.”