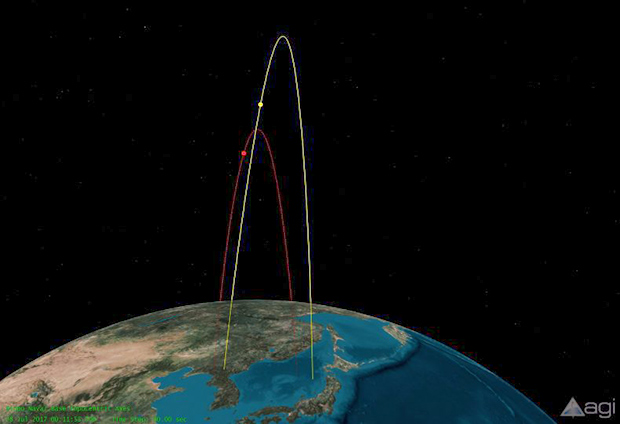 The missile, which reached an altitude of 3,700km during its 47 minute flight, came down into the waters off of Japan’s west coast after being launched from Mupyong-ni, Chagang province, at 11:41 p.m. local time. Had the projectile been launched on a normal trajectory, analysts say the ICBM may have reached as far as Chicago.

“Based on the July 28 launch, preliminary impressions are that North Korea would be capable of easily ranging the contiguous United States…” The Diplomat’s Ankit Panda writes.

“The July 28 test would suggest that North Korea could potentially reach targets as far away as New York City and Washington, DC, depending on the size of its weapons payload.”

The missile type, confirmed to be a Hwasong-14, was also used in North Korea’s first ever ICBM test launch on July 4. A comparison between Friday’s launch (yellow) and the July 4 test (red) suggests Pyongyang did not originally display the Hwasong-14’s full capabilities.

Calculations from David Wright, physicist and co-director of the UCS Global Security Program, likewise found that major US cities are now within range of Pyongyang’s long-range missile. With an estimated reach of anywhere between 10,400km and 11,000km, a North Korean ICBM could easily reach Denver and Chicago.

“Los Angeles, Denver, and Chicago appear to be well within range of this missile, and that Boston and New York may be just within range. Washington, D.C. may be just out of range,” Wright said, noting that everything from the earth’s rotation to the mass of the payload could alter the figures.

While North Korea is not believed to have a nuclear device capable of surviving an ICBM’s reentry stage, a new assessment from the ­Pentagon’s Defense Intelligence Agency (DIA) has removed two full years off the timetable for when the communist regime is expected to obtain the technical prowess.

“The DIA has concluded that North Korean leader Kim Jong Un will be able to produce a ‘reliable, nuclear-capable ICBM’ program sometime in 2018, meaning that by next year the program will have advanced from prototype to assembly line, according to officials familiar with the document,” the Washington Post reports.

In a unexpected move, South Korea, which originally rejected the additional deployment of Terminal High Altitude Area Defense (THAAD) launchers from the United States, also signaled its desire Friday to deploy new components of the missile defense system. Though THAAD is incapable of stopping ICBM’s, South Korean President Moon Jae-in has called on the government strengthen the nation’s defenses.

A growing number of politicians in South Korea, skeptical of the United States’ willingness to defend Seoul in the event of an attack, are also calling on the Moon government to begin developing nuclear weapons of its own – stirring global fears of nuclear proliferation in the Korean peninsula.

The Trump administration has focused primarily on using sanctions against Chinese entities in an effort to derail North Korea’s missile and nuclear weapons programs. Experts are increasingly calling on the White House to enter into diplomatic negotiations with Pyongyang as the country’s capabilities become increasingly clear.

“During the call Dunford and Harris expressed the ironclad commitment to the U.S.-Republic of Korea alliance,” a Pentagon statement said. “The three leaders also discussed military response options.”