Adam Lanza, the purported Sandy Hook School shooter, is the subject of an ongoing investigation in Connecticut. No, it’s not a police probe, it’s about “mental health.” 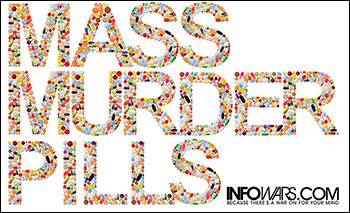 The investigation is all about Lanza’s medical history, what diagnoses were made, who the doctors were, what psychiatric drugs they prescribed Lanza.

The Governor of Connecticut is ultimately in charge, in order to make recommendations about improving “mental health” in the state and preventing future violent tragedies.

But the inquiry has stalled. And stalled.

Despite multiple agencies apparently having possession of Lanza’s medical/psychiatric history, these reports have been held close to the vest and not released.

There are a number of reasons.

First and obviously, the psychiatric drugs didn’t make Lanza better, they made him worse; and some of those drugs, like the SSRI antidepressants, are known to cause violent behavior, including homicide.

The Assistant Attorney General of Connecticut, Patrick Kwanashie, remarked, when asked why the list of psychiatric drugs Lanza took over his lifetime wasn’t being exposed: “[It] would cause a lot of people to stop taking their medications.”

Rightly or wrongly cause people to stop? Kwanishie meant wrongly, but the truth is: rightly.

“What is known is that Adam [Lanza] was treated over many years, by many mental care practitioners, for his disorders.” Can’t expose all these doctors’ failures.

“Adam’s primary psychiatrist was Dr. Paul Fox who, in 2011, surrendered his license to practice medicine in Connecticut and New York, destroyed his records and moved to New Zealand.” Well, doesn’t that raise some juicy questions.

“The last known treatment for Lanza was from the Yale Child Study Center…Nancy Lanza [Adam’s mother] reported to Yale that Adam was experiencing an adverse reaction to the psychiatric drug, Celexa, prescribed by Yale.” Celexa is an SSRI antidepressant, and as mentioned above, all the SSRIs are known to produce violent behavior in patients. (See the website, SSRI stories.)

To further indict Yale (an eternal Connecticut institution of great prestige), here is a quote from the State Police Report re Adam Lanza: [Dr. Robert A King of the Yale Child Study Center…indicated] “that serotonin reuptake inhibitors [SSRI antidepressants], agents such as Zoloft, Luvox, Celexa, Lexapro or Paxil are useful in reducing those symptoms [of depression]…”

Yet more reasons why Adam Lanza’s true and complete psychiatric- drug history hasn’t been published thus far? Connecticut Governor Dan Malloy has, at the very least, a strong sentimental attachment to Yale, since he is a lifelong dyslexic and Yale has a center devoted to the study of dyslexia.

More importantly, to the degree that Yale could be exposed and absorb tremendous negative publicity re Lanza, the governor of Connecticut wants to protect that institution. It’s part of his job description.

Then there is the little matter of the Governor’s son, Ben, being arrested on a 2009 charge of trying to steal marijuana from a man. The Governor remarks that Ben was suffering from severe depression, is in treatment now, and is doing well.

Does this mean the criminal charge was vacated in favor of psychiatric treatment? Does the Governor want to risk negative exposure for a psychiatric system that saved his son from doing jail time?

But above and beyond all these reasons why Lanza’s complete and detailed psychiatric-drug history has been hidden, there is this:

Connecticut is home to a collection of important pharmaceutical companies. And yes, Virginia, there is something called the domino effect. If Lanza’s meds were publicly connected to the Sandy Hook shooting, it would be bad for the overall medical-drug business. Very bad.

These drugs companies protect each other when the chips are down, because they’re all selling highly toxic drugs, and that basic secret has to stay in the closet.

Here is a list of drug and medical research companies that have either corporate headquarters or significant research facilities in Connecticut:

Pfizer, of course, manufactures Zoloft (an SSRI antidepressant) and Xanax, a highly addictive drug given for anxiety and panic attacks.

Do all these corporate brethren of toxic drugs exert major influence in Connecticut state politics?

Is the Pope Catholic?

Circling the wagons to prevent Lanza’s psychiatric-drug history from exposure would be on their to-do list.

Finally, all roads in Connecticut lead to Yale. The University engages in a boggling amount of medical research and teaching activity. Who pays for it? Here is a list of some of its corporate funding partners who engage in pharmaceutical-related business:

Boehringer; Bristol-Myers; Roche; Merck; Ziopharm; Achillion; CuraGen; Metrum Research Group; and Orbi Med, a company which does asset management in the “global health sciences” sector, and has $5 billion in assets.

A 2008 Archstone Consulting study concluded: pharma companies added more than $14 billion to the Connecticut economy in that year. And Connecticut colleges and universities laid out about $600 million for bioscience research in 2008, which was 81% of their whole academic R&D pie.

The names Sandy Hook and Newtown, however, are now so famous that, somehow, we may see Adam Lanza’s concealed psychiatric records emerge into the light of day.

Peter Lanza, Adam’s father, says he has his son’s medical/psychiatric records and is willing to release them to the investigating commission.

However, this doesn’t mean the public will ever see them.

Big Pharma, day in and day out, celebrates its massive proliferation of drugs for every condition under the sun, including those conditions which are invented out of wholecloth. It creates the illusion that the drugs are absolutely necessary, in order to maintain health.

Admitting that this is all propaganda, and further confessing that some of its drugs routinely kill people and push them over the edge into violence is not part of their program.

And when it comes to an event as explosive as Sandy Hook, accepting blame because the accused shooter was ingesting, for years, psychiatric drugs that scramble neurotransmitters and cause extremely violent behavior…that is out of the question.

The pharmaceutical illusion must be maintained.

A film in which I was interviewed, and on which I worked as associate producer, American Addict, is now available at Netflix and other platforms. (See americanaddictthemovie.com.) Dr. Breggin is interviewed, as well Dr. Barbara Starfield, the late revered public health expert, who blew the whistle on medically caused deaths, in her landmark study, “Is US Health really the Best in the World” (JAMA, July 26, 2000).