The corporate funded exploitation of freedom, democracy, and human rights. 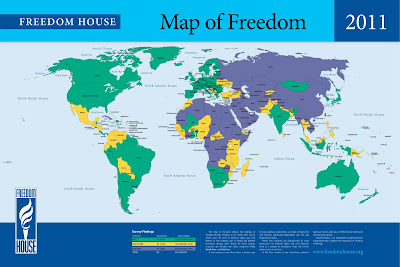 Bangkok, Thailand April 10, 2011 – The colorful maps of press freedom, democracy, and other metrics we are told are indicative of a free and prosperous society are the products of wholly corporate funded special interest lobbying groups like “Reporters Without Borders,” “Transparency International,” and the fraudulent “Human Rights Watch.” In giving us a clear picture of freedom, prosperity, and human rights throughout the world, they are about as accurate and as useful as divining rods are at finding water.

These large multinational organizations may include professional, dedicated, and immensely sincere people from all walks of life who believe in their cause, however, the vector sum of their effort is to advance the collective interests of the corporations that populate the board of directors and fund them.

The hyped, unverified hearsay coming out of Egypt, Libya, and now Syria regarding “alleged” brutal crackdowns on “unarmed” protesters has been lent legitimacy by being repeated through organizations like Human Rights Watch (HRW). In fact, nearly all of HRWs reports are merely collections of witness accounts, allegations, and hearsay, generally from protesters and opposition members and entirely devoid of any empirical evidence. Hearsay, one would reasonably think, is a good impetus for further investigation, not drawing a conclusion. For HRW however, the conclusion is usually already politically predetermined. In Libya’s case, Qaddafi’s ouster was a given, leaving HRW the task of simply filling in a compelling narrative.

Secretary of State Hillary Clinton, after admitting to funding sedition worldwide, demands that Qaddafi leave power based on still unfounded accusations. Perpetuating these accusations are corporate funded organizations like HRW.

Some samples of HRW reports regarding Libya:

HRW: “Libya: Allow Eman al-‘Obeidy to Leave Tripoli” Regards allegations of Eman al-Obeidy who claimed she was raped and tortured by Qaddafi forces in Tripoli before stumbling fortuitously into a hotel lobby full of foreign reporters. Her allegations remain as such, however this has not stopped the media or HRW from exploiting the story to bolster anti-Qaddafi sentiment.

HRW: “Libya: African Rights Court Issues First Ruling Against a State” Again, unverified allegations serve as the basis for a contrived court’s decision using entirely contrived laws to berate Libya and undermine the government’s legitimacy. To this day allegations against Libya’s military for intentionally targeting civilians are not only unsubstantiated, but refuted even by Western military analysts engineering the war.

HRW: “Libya: At Least 370 Missing From Country’s East” Here we have 72 “possible disappearance” cases “documented” by HRW, but based on interviews with family members or witnesses to the arrest of the “apparently” missing persons.

A pattern of consistently misleading propaganda becomes apparent – designed to undermine the Libyan government in support of the predetermined “Qaddafi must go” narrative. As the West’s aggression against Libya unfolds, evidence is emerging that not only is HRW’s propaganda misleading, but much of it is verifiable lies. Evidence is now emerging that these “freedom fighting” rebels are in fact Al Qaeda fighters, many of whom quite literally just got back from fighting Americans in Afghanistan and Iraq including one of the current rebels leaders, Abdel-Hakim al-Hasidi. 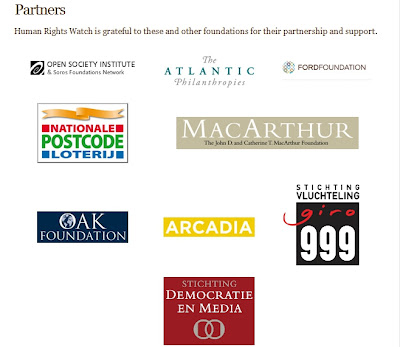 Funding HRW are the regular corporate suspects including
the Soros’ Open Society Institute, the Ford Foundation,
and the CFR lined Atlantic Philanthropies.

In Thailand, a combination of metrics stemming from these disingenuous groups are fueling another attempted color revolution trying to ride the current wave of destabilization started by the West through the US State Department, and equally disingenuous groups like Freedom House and the National Endowment for Democracy.

The leader of the Thai color revolution is globalist stooge Thaksin Shinwatra, a former adviser to the Carlyle Group who was literally standing in front of the CFR in NYC on the eve of his ousting from power in 2006. Since 2006, he has been represented by fellow Carlyle man James Baker and his Baker Botts law firm, International Crisis Group’s Kenneth Adelman and his Edelman Public Relations firm, Belfer Center adviser Robert Blackwill of Barbour Griffith & Rogers, and now Robert Amsterdam of Amsterdam & Peroff, a major corporate member of the globalist Chatham House. To say Thaksin has the support of multinational corporate interests is an understatement.

The opposition party operating under Thaksin has been attempting to undermine the government’s legitimacy through a steady stream of contrived metrics regarding “freedom,” “democracy,” and “human rights,” provided by Human Rights Watch, Freedom House, Transparency International, and Reporters Without Borders.

Often cited is the Freedom House’s “Freedom in the World” report where Thailand was downgraded from free under the globalist-friendly cleptocratic Thaksin regime, to partly free under the current Thai government who has been steadily distancing itself from free-trade with the US, ignoring US calls to enforce “intellectual property,” and pursuing a more protectionist policy in regards to the West and its unraveling economy.

What those who cite Freedom House forget to mention is that upon its board of trustees sits Kenneth Adelman who was Thaksin’s paid lobbyist. Such a conflict of interest derides Freedom House’s legitimacy entirely, and similar personalities and corporate sponsors involved in the organization have also directly benefited financially from conflicts started on lies given legitimacy through Freedom House’s “work.” These include both George Soros and signatories of the war mongering Project for a New American Century.

Reporters Without Borders is funded by the corporate-lined National Endowment for Democracy, and has downgraded Thailand as well regarding it as a “nation under surveillance.” The organization cites the crackdown on the elements involved in the foreign-backed color revolution as the reasoning behind its judgment, using the NED funded Prachatai website in particular as an example. Reporters Without Borders attempts to portray such crackdowns as an affront to freedom, even as Secretary of State Hillary Clinton openly admits to funding subversion worldwide.

Freedom House is a big fan of NED funded Prachatai as well.
Prachatai is an over-the-top propaganda clearinghouse for
the Thai red color revolution.

One must wonder how the United States would deal with foreign funded sedition when they are already labeling collector coin dealers “domestic terrorists” and dealing them out 10 year prison sentences.

Perhaps the most ludicrous of all is Transparency International which has been frequently cited by the color revolution for downgrading Thailand’s score on the “Corruption Perception Index” from 3.6 under Thaksin to a negligible 3.4 under the current government. Transparency International, however, is funded by perhaps the most corrupt corporations on earth, in human history, including: Anglo American, Ernst & Young, Exxon Mobil, General Electric, Merck, Procter & Gamble, Shell International, Abu Dhabi National Energy Company, and Wal-Mart. Foundation support includes the eugenicist Bill & Melinda Gates Foundation and the criminally run World Bank.

What exactly do these corporate-financier oligarchs have against Thailand? A lot of it stems from the failed US-Thailand FTA Thaksin tried to ramrod through into law before being ushered out of power. A quick look at the corporations (listed on page 8 here) of the US-Thailand FTA Business Coalition reveals some of the largest, most influential corporations on earth, many of which are also found on lists naming the key corporate members behind the global corporate-financier agenda. Impeding the US-Thailand FTA doesn’t just deny these power-mad corporations another market to plunder, it impedes the entropy of global oligarchical megalomania in general.

Thailand and Libya are but two examples. These organizations are manipulating public opinion and providing armies of seditious agents worldwide with statistics and official looking reports, leveraging the very noble causes of human rights, democracy, and freedom for their own nefarious agenda. As chaos attempts to consume Syria, Iran, and even Moscow and Beijing, remember the names of these organizations – Human Rights Watch, Reporters Without Borders, Freedom House, and the ridiculous Transparency International and recognize the disingenuous agenda they are peddling.