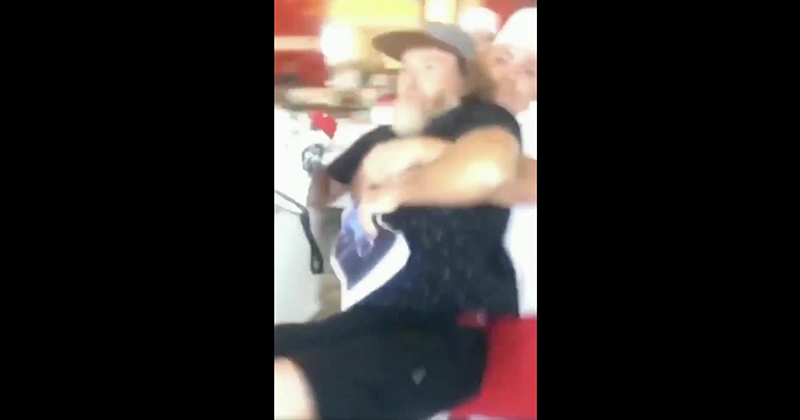 A video seen over 1.5 million times over the weekend shows a left-wing climate activist being manhandled by an In-N-Out Burger employee who wasn’t in the mood to deal with the obnoxious protesters.

Climate change activists raid a burger joint and harass the workers. Neither the employees nor police are having it. People are fed up with Extinction Rebellion. pic.twitter.com/6bIPK4pb9U

In the footage, protesters allegedly with Extinction Rebellion are seen yelling at store employees before one man is picked up and carried outside by a male employee who then said, “You guys need to leave. We have you on video.”

The protester screamed into a megaphone held inches from the employee’s face, shouting, “I did nothing wrong! This is America, we can use our voice.”

In the next segment of the video, a female protester is escorted out of the building along with a trashcan that she digs in, supposedly looking for her bullhorn that was somehow thrown away.

After retrieving her property from the trashcan, police arrest the female protester while her counterparts yell, “She was the one who was assaulted.”

According to Twitter users, the incident took place at an In-N-Out Burger in Long Beach, California.

2nd and PCH in Long Beach! I went vegetarian ~6 months ago but I still go here all the time for the grilled cheese. Like all in n outs, they have the BEST staff!

For more information on the Extinction Rebellion watch Paul Joseph Watson’s report below: