Facebook has banned a Trump campaign ad because the company claims the ad is assuming a viewer’s “gender identity,” according to media reports.

The ad in question said Trump “needs the support of strong women like you,” but it was apparently pulled down by Facebook after an activist group complained it violated Facebook’s terms of service by including “direct or indirect assertions or implications about a person’s… gender identity.” 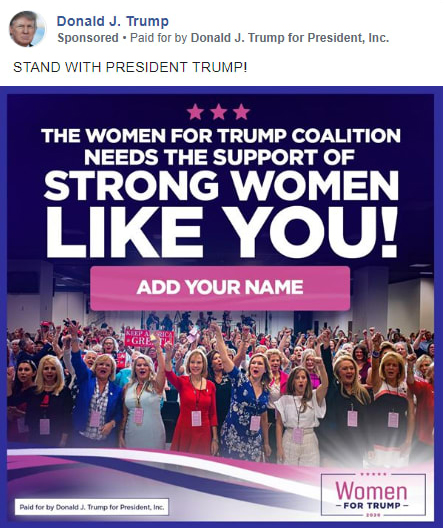 “Trump’s ad is clearly prohibited, but Facebook allowed it to run until an inquiry by Popular Information,” the group reported. “‘We’ve notified the campaign that the ads violate policy. They can’t continue to run unless fixed,'” a Facebook spokesperson told Popular Information.”

Given how broadly this policy is written, it will prevent Trump’s re-election campaign from targeting key voter segments on Facebook.

The ad would have also presumably targeted women on Facebook who set their gender to “female,” and if that’s the case it’s unclear how that ad could have violated the terms given Facebook’s ability to only display ads to intended audiences.

A pro-Trump meme maker was also blocked on Facebook hours after he announced the launch of his new meme web site on Tuesday.

Carpe Donktum announced his new site MemeWorld.com – and then announced not long after that the link announcing the site’s launch was blocked on Facebook.

FYI, the link announcing the launch is being blocked in @facebook messenger. pic.twitter.com/0Jll2yOo0w

Democrats Worry About Soft Level of Support For Candidates

It was also reported that top-tier Democratic presidential candidates are experiencing “soft levels of support.”

“A lot of Biden’s voters are pretty open to voting for someone else as the race unfolds and they get to know the other candidates better,” said Tom Jensen, the director of Public Policy Polling. “That doesn’t necessarily mean they’ll end up deciding they like someone else better, but they’re at least open to the possibility and I think that does make Biden’s front runner status a little tenuous — as anyone’s position this far out from the voting is a little tenuous.”

This would lead one to argue that the Democratic candidates are so weak that Big Tech actually poses a much bigger threat to Trump’s re-election chances.