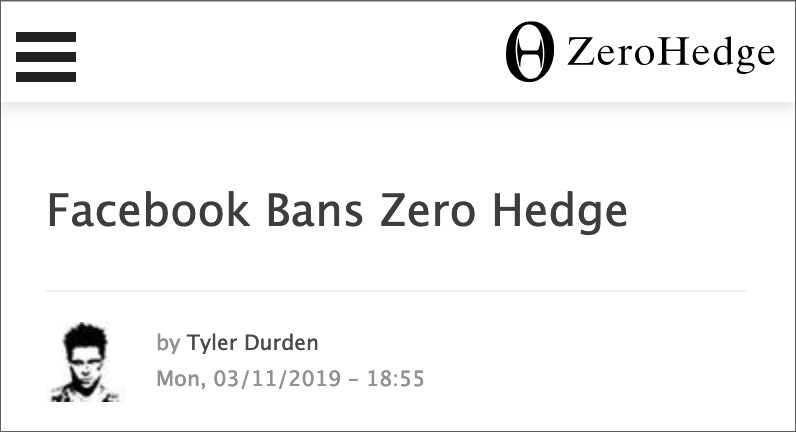 Facebook suddenly blocked the sharing of Zero Hedge articles on its platform Monday, claiming the outlet violates its community standards.

When a Zero Hedge article is linked on Facebook, instead of showing the content, a message pops up saying: “the link that you tried to visit goes against our community standards.”

Facebook has blocked all @zerohedge links, throwing up the following message: pic.twitter.com/iuc3UxWgE1

It’s unclear why Facebook decided to mark Zero Hedge as spam, as the platform has yet to issue a statement on the matter.

“Unfortunately, as noted above, we still don’t know what exact event precipitated this censorship, and any attempts to get feedback from the company with the $500 billion market cap, have so far remained unanswered,” Zero Hedge stated.

It’s possible Facebook has simply determined that Zero Hedge must be silenced due to its relentless coverage of Facebook’s many problems, including privacy violations, mass abandonment by younger users, systematic censorship, and shady government cooperation.

The move is nonetheless significant: even Infowars content can still be shared on Facebook despite being banned by nearly all major social media platforms, including Facebook.

Dr. Nick Begich explains how patriots and conservatives must kick down the digital doorway blocking their voice from being heard before it’s too late.