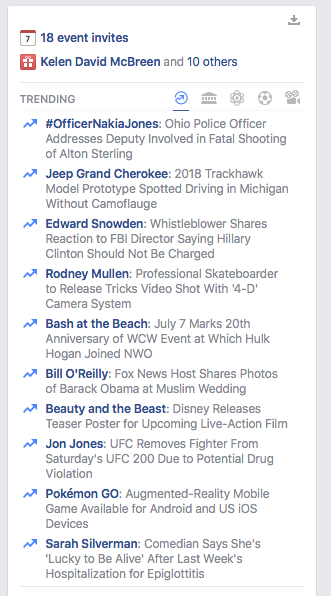 Despite every news network covering Congress’s grilling of FBI Director James Comey for letting Hillary off the hook – which was a trending topic on Twitter – the hearing was apparently blacklisted from Facebook’s “Trending Topics” sidebar.

Instead Facebook, which recently came under criticism for burying conservative and libertarian news, is pushing the latest Pokémon GO video game now “available for Android and US iOS devices.”

Compare this to Twitter, in which the #ComeyHearing hashtag was used nearly 35,000 times at its peak Thursday.

Facebook, of course, didn’t give the Comey hearing much attention; in addition to Pokémon, the social media giant was also busy promoting Disney’s latest “Beauty and the Beast” film.

In other words, you probably wouldn’t have known about the Comey hearing if Facebook was your only source of news.

But that’s the point: Facebook CEO Mark Zuckerberg is tightening control over what news is spread on his social media site so the establishment – which Facebook is a part of – can have better control of the narrative while keeping the truth away from the “little people.”

Interestingly, after an ex-worker revealed Facebook was censoring libertarians and conservatives back in May, Facebook apologists claimed the site was only featuring news that was also being reported on a list of approved “mainstream” sites, yet most of these sites were reporting on the Comey hearing and it still didn’t make the “Trending Topics” sidebar!

“A team of news editors working in shifts around the clock was instructed on how to ‘inject’ stories into the trending topics module, and how to ‘blacklist’ topics for removal for up to a day over reasons including ‘doesn’t represent a real-world event,’ left to the discretion of the editors,” the Guardian reported.

Therefore the editors likely blacklisted the hearing because it was damaging to Hillary.

Similarly, Facebook employees also suspended a ‘Trans For Trump’ page, censored a Trump supporter for mentioning Facebook censorship, and even asked Zuckerberg what they could do to prevent a Trump presidency.