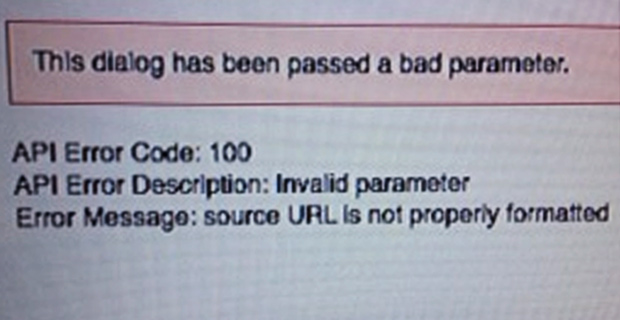 In an apparent example of Facebook censorship, multiple users of the social media site reported they were unable to share YouTube videos by Infowars and other alternative media outlets during the past day.

When attempting to share videos by Infowars and by social commentators E.T. Williams and Mark Dice, Facebook users received error messages preventing them from sharing the videos even though they were able to share videos from other, non-political YouTube channels.

He added that he has never encountered this issue before.

The typical error users received stated “source URL is not properly formatted” despite the fact that the URL was a standard YouTube link and Facebook also appears to be adding erroneous code to shortened Infowars.com URLs, so when its users clicked on http://bit.ly/FreeVideoStream this morning for the Alex Jones Show video stream, Facebook redirected them to the decoded URL http://bit.ly/FreeVideoStream%EF%BB%BF which obviously took them no where.

In light of all this, it must be emphasized that Facebook has an unfortunate history of suppressing political speech or even speech about inalienable human rights.

In late 2012, for example, Facebook suspended at least 20 accounts operated by individuals in alternative media during a 24 hour period, claiming they violated “Facebook policies,” not long after threatening to close the official Alex Jones account over an image of Osama Bin Laden with the words “Al-CIA-da” written underneath.

And last year, Facebook began allowing public school officials to censor the speech of its users in Maryland under the guise of “preventing cyberbullying” in a partnership with Maryland Attorney General Douglas Gansler.

Gansler said that even if Maryland users are not breaking the law, officials will remove content from Facebook if it has “no redeeming societal value.”

After Bloomberg’s Mayors Against Illegal Guns and Moms Demand Action pressured Facebook to censor gun-themed fan pages, the company finally agreed to do so on both its namesake site and its photo-sharing subsidiary Instagram.

It would certainly appear that Facebook is committed to silencing those who are not supportive of an unrestrained government in partnership with establishment corporations such as itself.

“If freedom of speech is taken away, then dumb and silent we may be led, like sheep to the slaughter,” George Washington wrote in 1783.