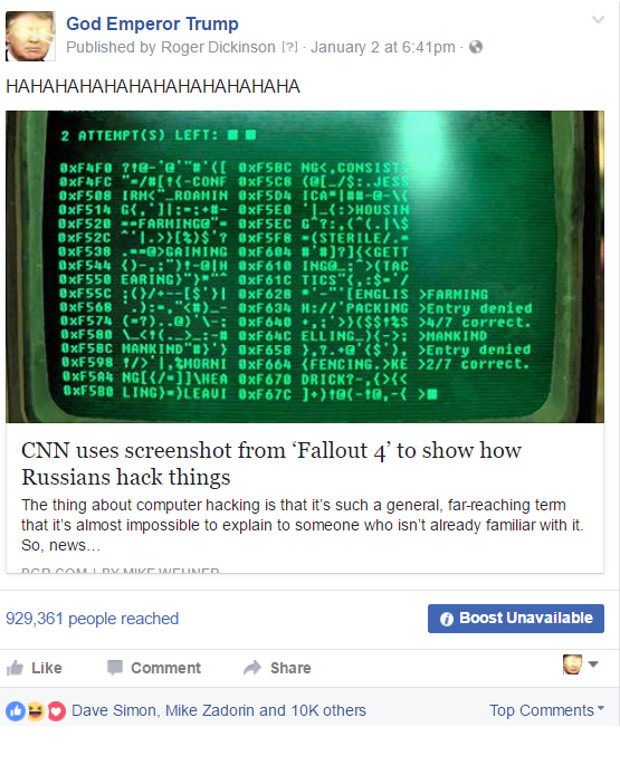 UPDATE: The God Emperor Trump Facebook page has been reinstated, due in large part to InfoWars readers, and a stunning response from supporters and followers, according to a new press release from the creators.

‘God Emperor Trump’ had become one of the most powerful Facebook personalities supporting Donald Trump, with over 200,000 followers and another 40,000 followers of a back-up account, before both were eliminated by the social media giant in the past 48 hours.

The account’s creator was notified that the page had been unpublished by Facebook, without any warning or specifically cited violation.

God Emperor Trump (GET) issued a press release on their new website, stating:

“God Emperor Trump, a pro-Trump Facebook page with roughly 212,000 ‘Likes’, was unpublished by Facebook at approximately 1 a.m. on January 10, 2017. No reason was given, no content was removed, and no admins received individual punishment. The notification at the top of the page implies ‘hate speech’ is what provoked the action. Yet, we have not been given any evidence of hateful speech on the page, and actively try to be as open and welcoming to all people as possible.”

“We went out of our way to be open to all races, creeds, ethnicities, and nationalities, even though we are a pro-America, pro-Trump page. We never once posted something derogatory about race, gender, ethnicity, or nationality. All were welcome at God Emperor Trump, so long as they supported the President-elect, and loved the United States of America.”

A thread discussing GET’s ban on Reddit has exploded into the top 5 hottest subreddits on the site at the time of this writing, with outraged users voicing their disgust with Facebook in droves.

Facebook is notorious for their double-standards on what they consider “welcoming” or “respectful.”

When Facebook users reported a video livestreamed by Chicago thugs torturing a disabled Trump supporter as being “graphic violence,” administration replied that it did not go “against one of our Community Standards,” and allowed the video to remain posted.

The Guardian reported, “Facebook refused to comment on how many people – if any – reported the content, although there appear to have been many comments under the live stream made by horrified viewers who may have also used the report tool. Nor would Facebook tell the Guardian when it first became aware of the video and how long it took to decide to take the footage down from the site.”

Facebook allows pages such as “Damn Those Racist, Homophobic, Bigoted Republican Born-Again Christians” and a wide variety of “F**k Donald Trump” pages and groups to operate without impediment.

Over the course of the Republican primaries and general election, GET became a wrecking ball on behalf of the President-elect, and against his adversaries.

After Trump officially secured his win over Hillary Clinton, GET leveled its sites on the lying mainstream media.

GET was instrumental in exposing CNN for using an image from a video game to support their propaganda about “Russian hacking” of the election, with a post that reached nearly one million users and launched an international scandal. 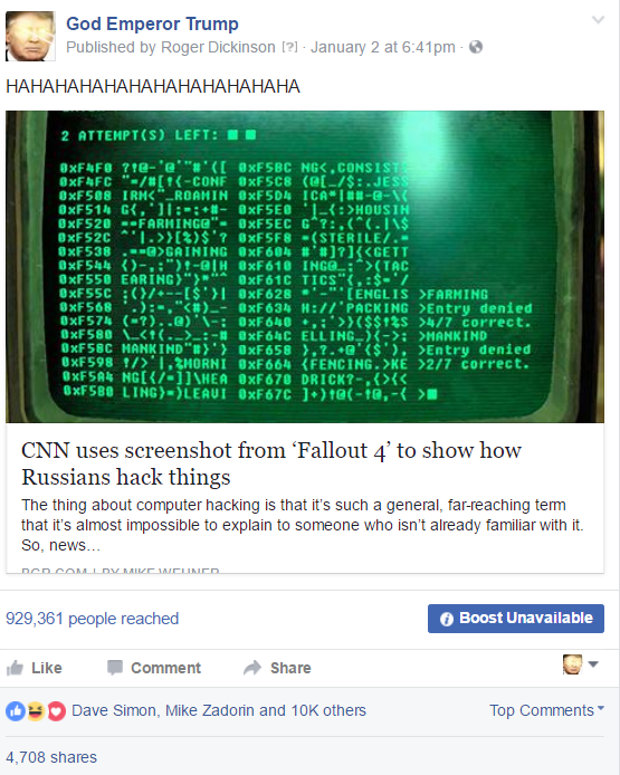 GET continued to apply pressure, utilizing ridicule to mock the failing network for their dishonesty and ineptitude with original content that has been shared and reproduced with massive reach. 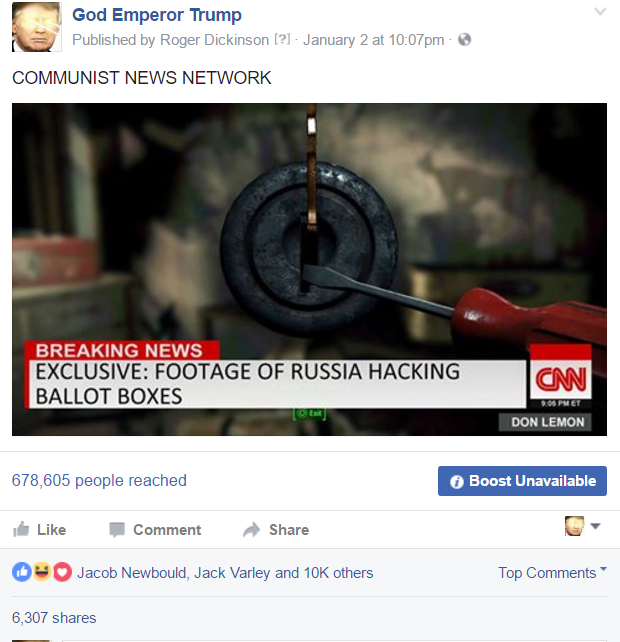 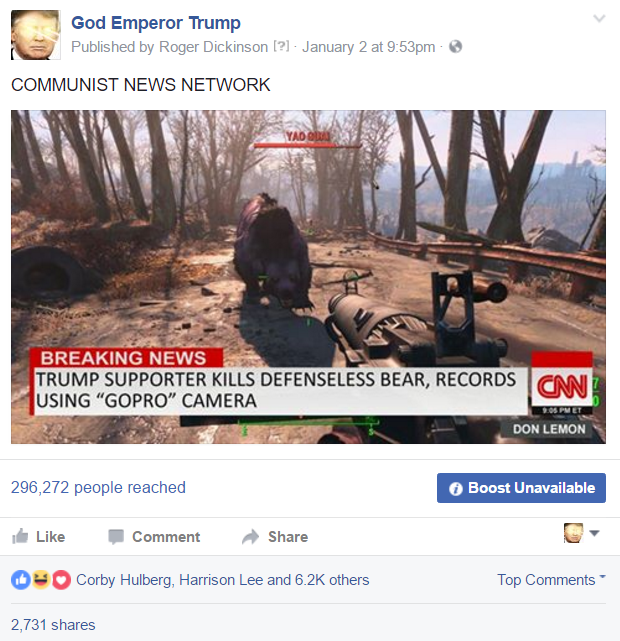 As an originator and propagator of wildly popular political cartoons known as ‘memes,’ God Emperor Trump’s influence in the information battlespace could not be understated, as content produced by the truth media and citizen activists function as munitions in social media trench warfare.

After nearly two years of steady growth, the timing of GET’s extermination is dubious in light of their recent effectiveness in damaging the mainstream media and the fake news narrative.