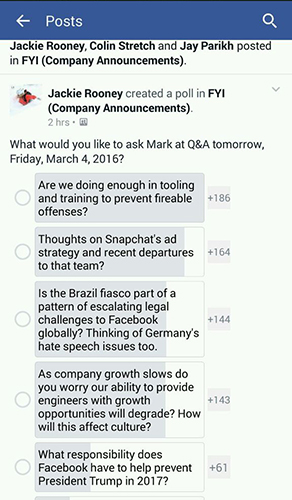 Facebook and its CEO Mark Zuckerberg are under fire today after it was learned employees asked their boss if they should sabotage Donald Trump’s presidential campaign.

Staff posed the question to Zuckerberg during an employee Q &A on March 4, Gizmodo reported on Friday.

Earlier this week Zuckerberg made disparaging remarks about the frontrunner during a keynote speech of the company’s annual F8 developer conference.

“I hear fearful voices calling for building walls and distancing people they label as ‘others,’” Zuckerberg said, refraining from calling Trump by name. “I hear them calling for blocking free expression, for slowing immigration, for reducing trade, and in some cases, even for cutting access to the internet.”

The Trump campaign accused  the Facebook CEO of “self-righteousness” and said that he was out of touch with ordinary Americans.

“I think I’ll take Mark Zuckerberg seriously when he gives up all of his private security, moves out of his posh neighborhood, and comes live in a modest neighborhood near a border town, and then I’m sure his attitude would change,” said Katrina Pierson Wednesday on CNBC’s “Squawk on the Street.”

For a developer’s conference, the comments were unprecedented—a signal that the 31-year-old billionaire is quite willing to publicly mix politics and business. Zuckerberg has donated to campaigns in the past, but has been vague about which candidates he and his company’s political action committee support.

Facebook responded to the employee poll by saying it will not use its algorithms to influence voters in November. “We as a company are neutral,” a Facebook spokesman said in a statement. “We have not and will not use our products in a way that attempts to influence how people vote.”

“We encourage any and all candidates, groups, and voters to use our platform to share their views on the election and debate the issues,” the spokesman added.

The official statement, however, does not jive with Zuckerberg’s comments during the developer’s conference.