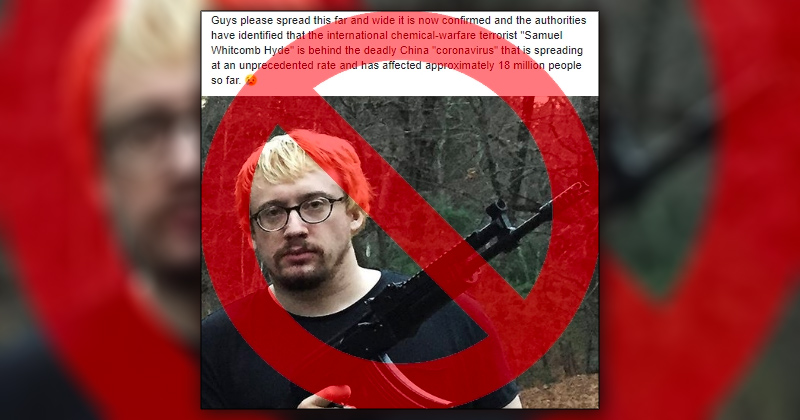 An internet fact-checker has debunked claims that comedian Sam Hyde is responsible for the outbreak of the deadly Coronavirus.

FactCheck.org posted a webpage shooting down alleged claims that the Million Dollar Extreme funny man had something to do with the virus which originated in Wuhan, China.

In an article titled “Comedian Sam Hyde Not ‘Behind’ Spread of Coronavirus,” the fact-checker dismisses the accusations.

The website starts by explaining how the myth came to light, where “A post on Facebook falsely claims comedian Sam Hyde is responsible for the spread of the new coronavirus. Researchers are still working to determine the source of this latest coronavirus, though evidence suggests it was first transmitted to humans from an animal.”

The article gives a brief overview of the Coronavirus before revealing to the reader the identity of the international man of mystery, Sam Hyde. FactCheck.org writes:

A post on Facebook makes the bogus claim that “authorities have identified that the international chemical-warfare terrorist ‘Samuel Whitcomb Hyde’ is behind the deadly China ‘coronavirus.’”

Sam Hyde is actually an actor, known for his work with sketch comedy group, “Million Dollar Extreme.” The group created a series called World Peace, which aired in 2016 on the channel Adult Swim, and was cancelled after being accused of promoting racism, sexism, and bigotry.

Hyde has been a target of other bogus internet conspiracy theories, usually involving mass shootings, as Forbes magazine documented in 2016. “If Twitter is to be believed, second-rate Internet comedian Sam Hyde is behind every nationally publicized shooting of the past year — that’s more than a dozen since last October,” the Forbes article said.

The news was brought to light by the below tweet.

Many social media users often post images of Sam Hyde holding an AK variant rifle after a terrorist attack or major atrocity, jokingly pointing the finger at the comedian.

Some decided to leave a few tongue-in-cheek remarks beneath the original tweet.

"Sam Hyde isnt behind the spread of Coronavirus"

Thats exactly what Sam Hyde would want you to think

How does he keep getting away with these attacks!

BuzzFeed produced a video last year that carried the headline: “Why ‘Sam Hyde’ Goes Viral After Every Mass Shooting.” It opens with CNN’s coverage of a mass shooting in Sutherland Springs, Texas, in 2017, and Rep. Vincente Gonzalez of Texas mistakenly telling CNN that Hyde was the suspected shooter.

“Apparently, his name was released as Sam Hyde,” Gonzalez wrongly told CNN. “That was a name I was — I was given. We don’t know any more details.”

Gonzalez “fell for a long-running hoax,” as the New York Times explained at the time. Gonzalez’s office issued a statement that said he “deeply regrets” the error, the Times reported.

The latest hoax about Hyde also claims that the virus is spreading at an “unprecedented rate” and has “affected approximately 18 million people so far.” As of early Jan. 27, there had been nearly 2,900 confirmed cases globally and 81 reported deaths. So far, all of the deaths have been in China, with the vast majority of cases occurring in China. In the United States, there have been five confirmed cases, as of Jan. 27, according to the Centers for Disease Control and Prevention.

The spread and death toll of the Coronavirus continues to rise. Several airports have suspended flights to and from China over concerns relating to the disease as some carriers have been known to either flout border controls or experience symptoms after carrying the virus.

Mike Adams joins The Alex Jones Show to break down the reports of coronavirus breaking out in the U.S.