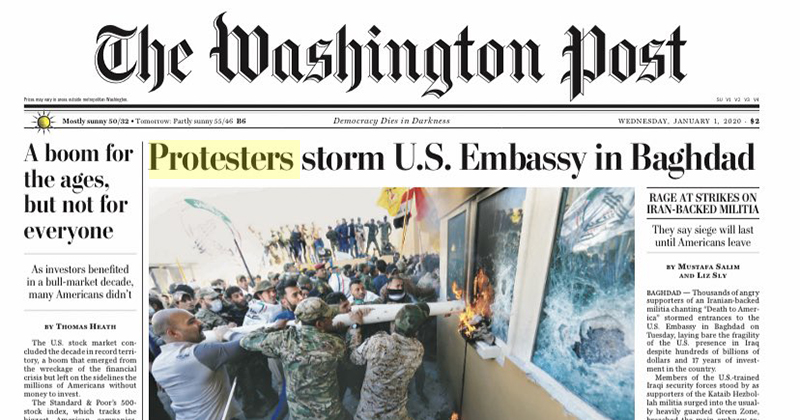 The leftist media in the US started off 2020 with a cacophony of fake news Wednesday by labeling Hezbollah terrorists who attempted to storm the US embassy in Baghdad as ‘protesters’.

The pictures from the mob attack clearly show that it was led by members of Tehran’s militia units in Iraq which have been absorbed into the Iraqi security forces.

Kata'ib Hezbollah is a designated Foreign Terrorist Organization (FTO) and the attack should be treated as a terrorist attack and not a bunch of "protesters" getting out of controlhttps://t.co/do8GT83AKX https://t.co/ypsbg3zmoB

The assault on the embassy was a response to US airstrikes targeting Iran-backed militants in Iraq and Syria who killed a U.S. military contractor last week.

The violent Islamist terrorists chanted “No, no to America, no, no to Israel,” while storming the building and setting it on fire.

This is all clear as day, yet take a look at The Washington Post’s front page Wednesday:

This is why no one trusts the media

They were siding with terrorists hoping for another Benghazi. But instead President Trump acted swiftly and sent in the Marines. https://t.co/TqMYLrzxNS

Every time members of the media blame Trump for their own lack of credibility, rather than looking in the mirror … https://t.co/elwIryd1EF

And it begins by calling violent Islamists "protesters." https://t.co/YESF2DFEyo

The picture clearly shows these are members of Tehran's militia units in Iraq which are now part of Iraqi security forces. Washington Post and New York Times lose their credibility by acting as anti-US propaganda machines. https://t.co/a3rhGN3QkB

Protesters? They were members of a pro-Iranian militia that has attacked, killed and wounded Americans. https://t.co/sS2lw48Ihz

Back in the 1970s and 80s they called the Iranian aggressors “students” so protesters being used now is not surprising. https://t.co/vqgHsps3zo

I dunno, WaPo. When the protesters are wearing combat fatigues, it's maybe a signal that something else is going on. https://t.co/g8A1bF3nxB

Others noticed the mis-spelling of ‘terrorists’ or ‘militiamen’:

The editor spelled "militiamen" wrong. These vandals have nothing to do with the ongoing peaceful protesters in Iraq, killed and kidnapped by members of this militia https://t.co/fmznA1lI6u

Some noted how the Post was almost as dishonest as CNN, which had earlier called the mob ‘Iraqi mourners’:

And WaPo kicks the New Year off with Fake News.

They were Iran-Backed Terrorists.

Not “Protesters” or “Iraqi Mourners”

How are they so bad at this? https://t.co/AjcOqYYHiS

They're almost as dishonest as @CNN is. That's quite a feat! https://t.co/IfZ4k42zUt

The New York Times also got in on the ‘mourners’ debacle:

Hundreds of Iraqi mourners tried to storm the United States Embassy in Baghdad, shouting “Down, down USA!,” in response to deadly American airstrikes this week that killed 25 fighters https://t.co/jrAtON72eR

“Mourners.” It’s not hard to see which side the New York Times sympathizes with here https://t.co/kjcPW9XTd7

For months, furious protests have battered Iraq, driven by the pervasive influence of a foreign power: Iran. But now protesters have turned their sights on the U.S. So what happened? https://t.co/dV6LtWPl4Y

In reality, protests have been going on for months against Iran’s influence in Iraq. The real Iraqi protesters are against the very people who attacked the embassy. The pro-Iranian militia have even been killing those protesters.

However, the NY Times is lumping them all in the same basket.

The media also claimed that President Trump was golfing instead of paying attention to the potentially deadly situation at the embassy.

The Fake News said I played golf today, and I did NOT! I had meeting in various locations, while closely monitoring the U.S. Embassy situation in Iraq, which I am still doing. The Corrupt Lamestream Media knew this but, not surprisingly, failed to report or correct!

Why is the media covering for a group of America-hating terrorists?