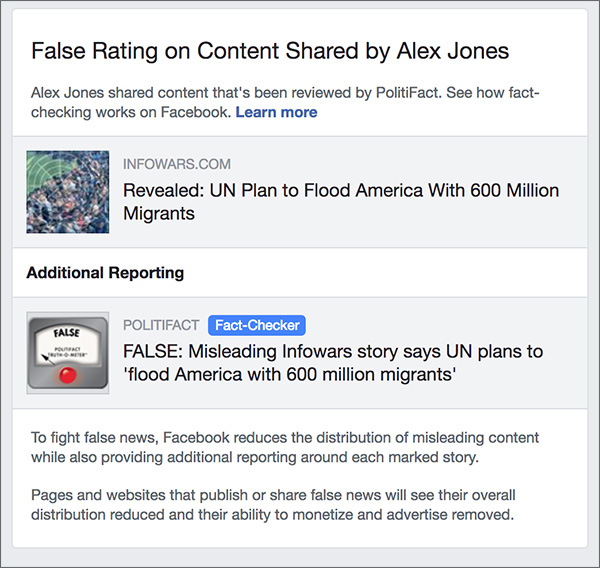 Facebook is not only in the business of flagging fake news, but real news as well.

A recent Infowars report by Paul Joseph Watson details a UN plan from 2001 which games out several scenarios of mass migration into developed nations to “offset population decline and population ageing resulting from low fertility and mortality rates.”

Watson’s report, entitled “Revealed: UN Plan To Flood America With 600 Million Migrants,” has been flagged by Facebook on behalf of Politifact, who is partnered with the social media company to “use both technology and human review to remove fake accounts, promote news literacy and disrupt the financial incentives of spammers.”

So, Politifact and Facebook don’t take issue with the actual facts of the report itself, but with Watson saying “revealed” in the headline, claiming that it somehow disqualifies the story as “fake news.”

Of course, because the renewed debate on mass immigration has been dominating the national conversation, the relevance of the article speaks for itself.

It’s also clear Watson used “revealed” in the headline to literally reveal the obscure UN report from 17 years ago that many had no idea even existed.

Says that "replacement migration" is needed to "offset population decline."

The UN report, titled Replacement Migration: Is It a Solution to Declining and Ageing Populations?, lists six specific scenarios America could face should its population continue to decline.

Politifact points to a claim within the report that it’s “not meant to be recommendations in any way, but illustrations of hypothetical scenarios.”

However, the report’s own opening summary directly contradicts that statement:

“The new challenges of declining and ageing populations will require comprehensive reassessments of many established policies and programmes, including those relating to international migration.” 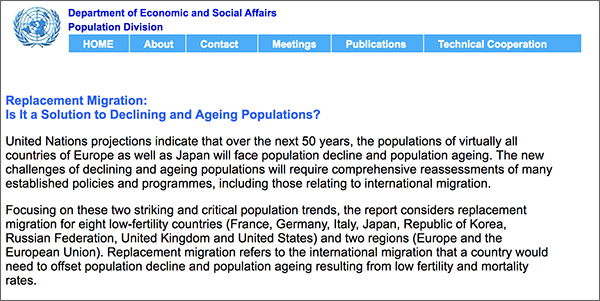